Four defeats from the opening five matches had the doom-mongers and naysayers predicting tough times for FC Augsburg and a season-long fight to beat the dreaded drop. Two matches and two wins later it looks as if they might have been a little premature in their pessimism.

The smiles on the faces of players, trainer and coaching staff couldn’t have been bigger after Augsburg’s 1-0 win over Rekordmeister Bayern Munich on matchday 7. The unlikely victory came a week after their first of the season against Werder Bremen and saw them climb out of the Bundesliga basement.

Coach Enrico Maaßen takes a large part of the praise, while goalkeeper and new signing Mergim Berisha have also played their part. The away win at the Weser Stadion came after a change of change of formation, a change of tactic and a team meeting with the squad.

38-year-old Maaßen arrived from Borussia Dortmund II in the summer with plans to get Augsburg playing possession-based football. The 3-5-2 formation however didn’t really work, and the players struggled to create chances and were sluggish. After the 2-0 home loss to Hertha on matchday 5, enough it seemed was enough.

An ambitious 4-2-3-1 formation with a dual striker force of Ermedin Demirovic and Florian Niederlechner backed up by the wide attacking duo of Andre Hahn and new signing Mergim Berisha was unleashed. The formation was more like a conventional 4-4-2 against Bayern, but the same four players were line-up with Berisha this time more advanced and Demirovic on the left. Again, the brave team selection paid dividends. 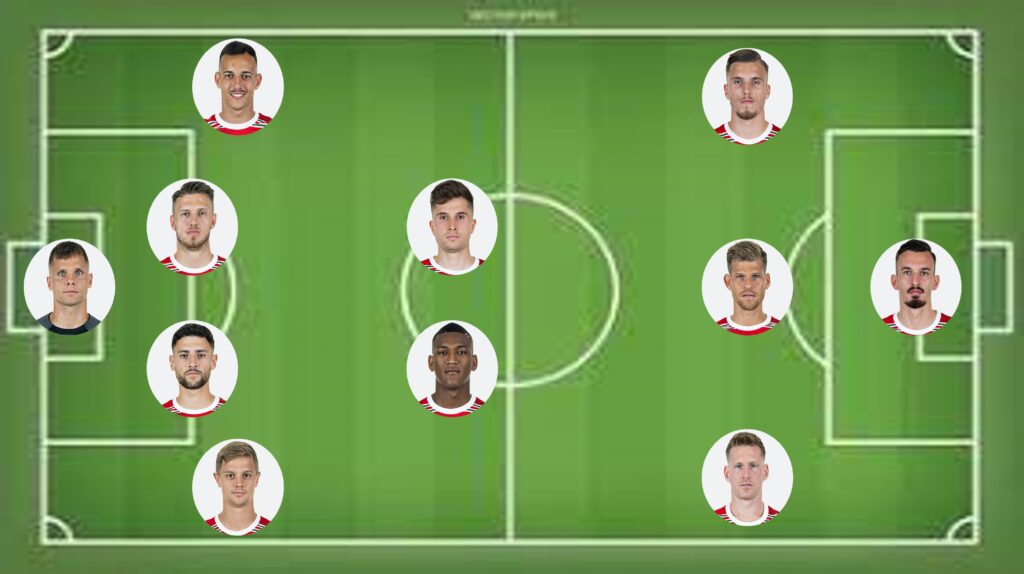 “Enno has shown that he has big balls” exclaimed goalkeeper Rafal Gikiewicz after the Bayern win. “If you play with four strikers in Bremen and also today, you have to have really big balls. 70 percent of the coaches want to have a low block against Bayern and park the bus for 90 minutes.”  Gikiewicz himself produced a heroic display against the Bavarians denying them again and again. He saved his best to last though with a point-blank save from counterpart Manuel Neuer in stoppage time. The Polish custodian had also been the hero of the hour in the previous match in Bremen saving an injury time penalty from Marvin Ducksch to secure all three points.

The signing of Mergim Berisha has coincided with this upturn in fortunes. To add to his goal against Bayern the German striker hit four goals in a friendly arranged during the international break against Austria Lustenau (Augsburg won 5-2).

Maaßen’s change in approach, formation and tactics has paid off in the last two games and the challenge now is to marry his philosophy to the ‘Augsburg way’ that has been so successful in keeping them in the Bundesliga all these years. Up this weekend is an away trip to face Schalke- a match on paper Augsburg should be fairly confident of gaining another positive result from.

Just a few weeks after Bayern Munich triumphed in the Champions League to clinch another treble, the 2020/21 Bundesliga seasons gets underway with the shadow of the corona virus crisis hanging over it. The new […]