The Bundesliga returns after the international break with a real mouth-watering match to kick-off the matchday 8 weekend. Bayern Munich host Bayer Leverkusen at the Allianz Arena with both sides in real need of the three points after poor results before the break.

Bayern’s run of four matches without a win has sparked talk of a mini crisis at the club and the pressure is starting to mount on coach Julian Nagelsmann, who will be desperate t avoid the second season syndrome fate that affected Nico Kovac during his tenure in Bavaria.

A lightning start to the season with fifteen goals in three games and just one conceded was a cause for optimism, but successive draws against Mönchengladbach, Union Berlin and VfB Stuttgart as well as defeat last time out to Augsburg has put a dampener on the new season. The forward line has stopped scoring, players look out of sorts and teams feel Bayern are there to be got at at the moment.

Friday’s visitors Bayer Leverkusen will be hoping the downturn in fortunes continues for the Rekordmeister as they seek to overcome their own demons. Many people had Gerardo Seoane’s team down as a genuine title contender this season to rival the likes of Borussia Dortmund and RB Leipzig, but that has been far from the case thus far.

Losing four of the opening five Bundesliga matches, crashing out of the DFB Pokal to minnows Elversberg as well as losing their opening Champions League tie with Brugge was not the start anyone at the Rhine club imagined. A win over Mainz and an impressive victory over Atletico Madrid have kept the wolves at bay for now, but a longer-term recovery is needed to make the trainer’s position more secure.

Is this a good time to be facing Bayern when they are wounded, or are the Bavarians a more dangerous prospect as a result of the increased scrutiny thet;re coming under. Friday’s match looks set to be a fascinating encounter.

Manuel Neuer and Leon Goretzka were sent home from the German national team after testing positive for Corona virus but have both returned to training and should feature this weekend.  Noussair Mazraoui, Alphonso Davies and Sadio Mané didn’t return from national team duty until Thursday and will have just one session training before any possible selection on Friday.

Kingsley Coman is an outside bet for a squad place after his muscle strain, but Lucas Hernández remains out of action following the adductor tear he suffered against Barcelona.

Exequiel Palacios remains out with his thigh injury, as does Karim Bellarabi, who is recovering from his meniscus operation. Florian Wirtz has just started individual training, but Amin Adli could be ready for a place on the bench following his broken collar bone.

Julian Nagelsmann: “The majority have returned fit and healthy. Coman, Hernández, Sarr & Wanner are unavailable. We’ll need to see when it makes sense for King to return. It could be that we start easing him back in next week. Lucas will be out for longer.

“I’ve rewatched all our games and done a lot of analysis. We sat down and discussed it with the team today, as it’s the first day that everyone is back. I’m confident that we will deliver a strong performance tomorrow. 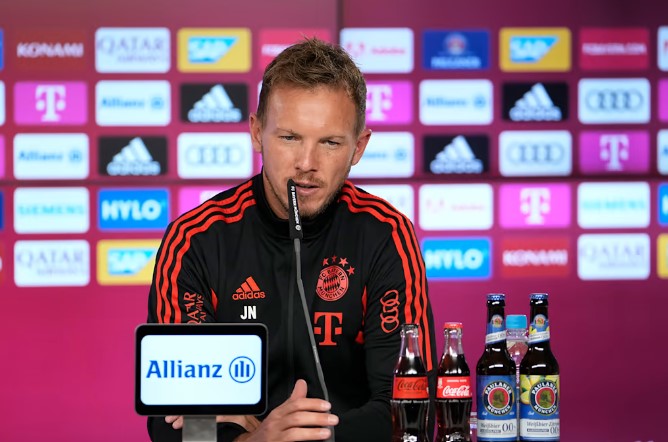 “Leverkusen have a difficult sporting situation, but they have a good squad and approach to football, very good individual players and an outstanding coach. It’s a top game, even if the table says otherwise. We want to invest, the potential that lies in the players makes me look positively to the future. We still have a lot up our sleeve. Courage is the anagram of luck. We want to make bold decisions. We’re not in the league position that we want to be. We have to be aware that we have to be number one when it comes to payday.

“I take every criticism to heart when it is brought to me. It is clear that the last two weeks have not left me cold. Every one of us must feel personal responsibility, and I feel that too. I know that I invest a lot in the job. I’m not solely responsible for everything, just like the players. It’s a team sport, and it will be tomorrow night too.”

Gerardo Seoane: “We have to grow in our tasks. Both individually, as a team and also me as a coach. The players and the staff have recently moved noticeably closer together. The solidarity can be felt from everyone to brace themselves against this situation.

“Sardar Azmoun is a great role model for everyone – in commitment and also in behaviour – we all have to put an arm around him and support him in this situation. With Sardar it was important to show empathy to give him a clear head for football. We’ll definitely take him to Munich. He really wants that too.

“Both teams are in a similar situation – each at their own level. Both are dissatisfied with the results, but both also show many positive approaches. Bayern Munich had an incredible number of chances to score in every game. We don’t need to talk about the quality.”

Matchday 25 last season witnessed a 1-1 draw at the Allianz Arena with Leverkusen becoming only the third team to take points off Bayern at home. The hosts looked comfortable after Niklas Süle gave them an 18th minute lead, but Thomas Müller deflected Kerem Demirbay’s free kick into his own net in the 36th minute.

The win put Bayern nine points clear at the top of the table ahead of the chasing Borussia Dortmund. Leverkusen moved third after the point, but fourteen behind the leaders.

A lot of eyes will be on Sadio Mané as the Senegalese forward seeks to quell all talk of crisis and personal struggle. The opening weeks of the season saw nothing but plaudits for the summer signing from Liverpool, but a few poor games now have people asking questions.

The best answer to critics is goals and performances. He only returned from international duty on Thursday so fatigue will play a role, but Mané will want to silence the doubters.

Kerem Demirbay has stepped up during Leverkusen’s recent struggles to be a key man. He has scored in each of the Werkself’s last three Bundesliga matches and has drawn praise from coach Seoane.

“He has given a lot to the team in the opening stages. I rate him as a very good player. He’s technically good and has good vision. What he has added to his game is the amount of work he puts in for the team, making tackles and doing a lot of defensive work,” Seoane told Kicker.

It is a well-known fact that defensive midfielders don’t get the credit they deserve and at RB Leipzig it is no different. Timo Werner’s goals, Christoher Nkunku’s flair, Marcel Sabitzer’s all-round excellence, and Dayot Upamecano’s […]

As the legendary former national team trainer once said: “Nach dem Spiel ist vor dem Spiel” (after the game is before the game). One game finishes, and another arrives hot on its heels. Matchday 4 […]

Five Questions Ahead of the European Restart

Are Bayern favourites for the Henkelpott? The Bavarians claimed the Bundesliga with an almost perfect Rückrunde and ended up 13 points ahead of runners-up Borussia Dortmund. Unbeaten in 2020, with a side that looks to […]