Crisis? What crisis? Bayern Munich sent out a real message to all the doom-mongers and naysayers who were talking of a mini crisis at the club by blowing Bayer Leverkusen away at the Allianz Arena with a stunning display that will fill trainer Julian Nagelsmann with joy.

Leroy Sané opened the scoring in the third minute from Jamal Musiala’s assist before the latter added the second himself on 17 minutes. Sadio Mané broke his recent scoring duck six minutes before half time. The second period saw an understandable decrease in intensity with the result beyond doubt and the visitors looking at damage limitation. A howler from Lukas Hradecky gifted Thomas Müller a fourth five minutes from time.

In our regular feature, we take a closer look at what can be taken away from Friday’s match.

1. The intensity of the Bayern press gave Leverkusen no chance

It is very hard to criticise Leverkusen as they were just blown away in the first 45 minutes by the intensity of Bayern’s press, which allowed them no chance to get out of their final third and the pressure just kept coming when Bayern won the ball back.

The criticism of the past few weeks had clearly stung the Bayern coach and players and the way they dominated in the opening period made it clear that the hunger and desire that sporting director Hasan Salihamidzic had demanded was there in abundance.

The front four kept the Leverkusen on the back foot and a goal looed imminent whenever possession was turned over (which was a regular occurrence).

2. Jamal Musiala is officially ‘next level’.

There are only a finite number of superlatives and in regards Jamal Musiala this season they are fast running out as he continues to dazzle. Not content with taking centre stage against England in the Nations League he put in another Man of the Match performance against Leverkusen.

He was the instigator for Leroy Sané’s opening goal and then scored the second himself with a well drilled shot. A Maradona-esque run through the heart of the Werkself defence set up Mané in the second half only for it to be chalked off for an earlier foul.

The 19-year-old was simply immense. (I mentioned the superlatives were running out). The World Cup stage might not be big enough for this huge talent.

3. Lukas Hradecky is increasingly a liability for Bayer.

Bayern were awesome as an attacking unit, but it must be said that they were given a helping hand on two of their goals by Leverkusen keeper Lukas Hradecky. The Finn was beaten far too easily at his near post by Jamal Musiala’s drive in the first half and his howler at the end of the second half allowed Thomas Müller the simplest of finishes after he slipped and mis-controlled a simple back pass.

The worrying thing that this is not an isolated occurrence with the Bayer custodian culpable for the Club Brugge goal in the Champions League and for Werder’s equaliser on matchday 7 in the 1-1 draw at the Bay Arena. The keeper has been so reliable for so long, but four errors are way too much, and questions will start to be asked.

AS mentioned, Bayern’s press was on point, but the fluidity of the front four was also a key feature tonight. Julian Nagelsmann sent on a team with Thomas Müller as nominally the most advanced with Jamal Musiala behind him, Sadio Mané on the left and Leroy Sané on the right.

Picking up Musiala was an impossible task for the Leverkusen back line as he drifted right (from where he set up the opener), left and central. Sané and Müller interchanged at will, with Sadio Mané the one sticking more to his side, but his goal came from his coming into a central position.

The evolution away from the reliance on Robert Lewandowski is coming along and, in some ways, when the new system clicks, the team look more dangerous than the days when the talismanic Pole led the line. Bayern look more dynamic and pose multiple threats from multiple areas.

5.The Bayern Ultras had their say

The Allianz Arena faithful were obviously content to see their side back to winning ways, but they still took the opportunity to have their voice heard and made two particularly telling protests during the match.

In the first half a banner was unfurled behind the goal which read: “State visits, Training camps. Thousands dead for a World Cup celebration. The only person doing better is a certain Uli H”- a stark message to former president Uli Hoeneß, who went on a German talk show last week to defend the Qatari World Cup. 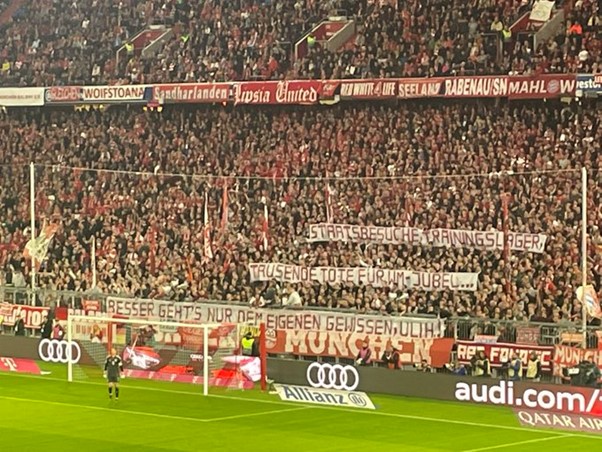 In the second half when Bayer Leverkusen brought on Iranian attacker Sardar Azmoun, two banners were unfurled in support of the protests taking place in Iran. “Solidarity with the feminist revolution in Iran” read one, while the other simply said: ““Jin, Jiyan, Azadi!” (Woman, Life, Freedom!).

All rivalries have to start somewhere and although the fierce rivalry between Bayern Munich and Borussia didn’t really manifest itself until the 1990’s with BVB’s increased success, the first meeting of the two occurred back […]

Quite remarkably Bayern Munich striker Robert Lewandowski is still very much on course to break Gerd Müller’s long-standing Bundesliga scoring record of 40 goals in a single season. As we enter the final stretch of […]

Five Questions Ahead of Bundesliga Matchday 30

The 2019-20 Bundesliga season is finally on the homeward straight as we enter the business end of the campaign. The runners and riders are jostling for position both at the head of the pack and […]