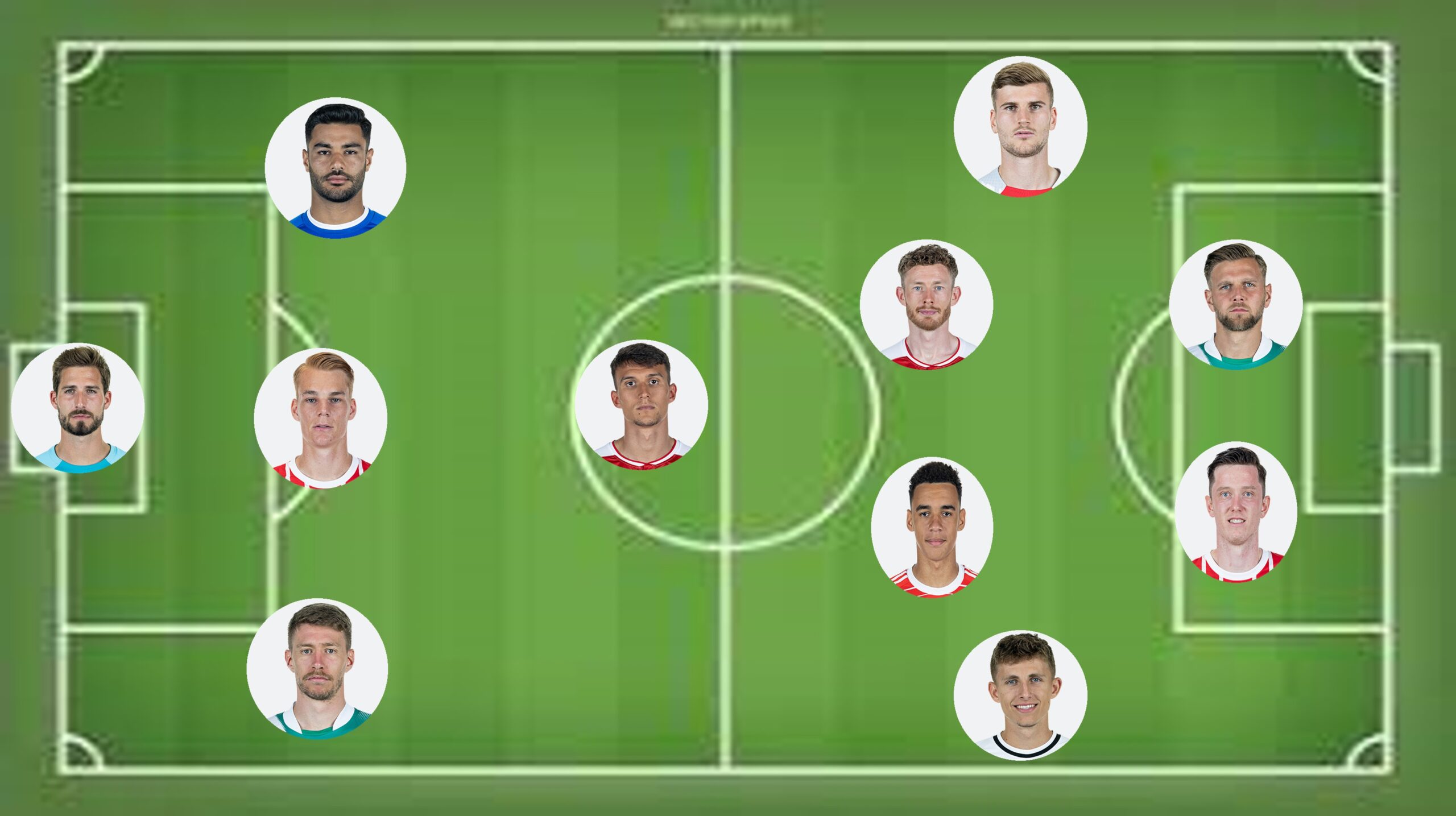 Germany’s third choice Germany for the World Cup showed he is more than capable if called upon as he produced a number of saves to help ensure Eintracht inflicted a first defeat of the season upon Union Berlin. He denied Janik Haberer an equaliser in the first half and again in the second period, He also pulled off top saves to deny substitute Tim Skarke on two occasions.

Werder’s right wing back had a superb game as Bremen stunned Mönchengladbach 5-1 at the Weser Stadion. He was a constant outlet wide down the right as an attacking force and capped a fine display with the fifth goal. He also hit the bar with an earlier header.

Turkish centre back Kabak seems to be really finding a home at Hoffenheim after a nomad existence in recent seasons. Another solid display was in evidence against Hertha Berlin as he had to cope with the pace of the hosts front three. He provided the assist for Andrej Kramaric’s goal, made five clearances, won all six of his aerial duels and enjoyed a pass completion rate of 76%.

Lienhart has gone under the radar a little this season with partner Matthias Ginter getting more of the limelight, but against Mainz he was commanding and matched his defensive partner if not outshone him as they endeavoured to shut out Karim Onisiwo et al.

Aside from his superbly taken goal that turned out to be the winner, the Austrian was an integral part of Köln’s second half resurgence against Dortmund. He had four shots himself and created five opportunities for others.

There is a reason Arsenal are being closely linked with a move for the Danish attacker and his display against Union just confirmed it. His moment of individual brilliance for his goal was just the crowing moment on an overall very good display of creativity and attacking threat.

Kainz was the spark that got the Köln fightback going against BVB at the Rhein-Energie Stadion. His goal set in motion the comeback and led the Billy Goats to an impressive win. His willingness to run and his delivery from the wide areas was a thorn in Dortmund’s side. His corner set up Steffen Tigges for the second goal.

Shall we just pencil Musiala in for the Tea of the Week every week? Bayern Munich needed a reaction following their poor run without a league win and following a headline-grabbing display against England at Wembley, the Bayern forward pulled out another top performance against Leverkusen.

He set up Leroy Sané’s opener, scored a superb second himself and then added a second assist for Sadio Mané before half-time. A Maradona-esque run through the heart of the Werkself defence set up Mané in the second half only for it to be chalked off for an earlier foul. Simply superb. Again.

Timo Werner has had to face a lot of personal criticism in recent weeks with his performances for the German national team and RB Leipzig coming under negative scrutiny. His response on Saturday against Bochum was the ideal retort to the pessimists out there.

After going five games without a goal in the Bundesliga he grabbed a brace to help die Roten Bullen to a 4-0 win. His first to open the scoring saw him become the first RB player to score 100 goals in all competitions for Leipzig firing into roof of net. His second saw him react very quickly after Andre Silva’s shot came back off the post. He also played the ball that led to Christopher Nkunku’s first penalty.

The whispers doing the rounds hinting at a potential World Cup berth for Werder Bremen striker Niclas Füllkrug are going to start to turn into louder shouts before too long. Two more goals this weekend takes his season haul to seven in eight games and provides more ammunition for those pushing Hansi Flick to take him to Qatar.

It took him just five minutes to open the scoring against Mönchengladbach as he showed the desire to get on the end of Romano Schmid’s ball ahead of Joe Scally. With Werder running riot at the Weser Stadion, he added his second and the hosts third on 14 minutes after being teed-up by strike partner Marvin Ducksch. He then provided the assist for Mitchell Weiser to put the final nail in the Gladbach coffin late on.

Both Freiburg and Augsburg are getting the most from the swap deal involving Gregoritsch and Ermedin Demirovic, but the Austrian forward is certainly enjoying life in the Black Forest, and he produced another top display to help beat Mainz.

A superbly taken effort put the Breisgauer into the lead and his finish very nearly made it 2-0 only for the crossbar to deny him. Fortunately, Daniel Kofi Kyereh was on hand to prod home the loose ball, but much of the credit goes to Gregoritsch.

As ever there were more worthy candidates than places in the final Team of the Week, so a subs bench needs to be created. Marvin Schwäbe impressed in goal for Köln as did Koen Casteels. Defensively Willi Orban and Ansgar Knauff did well. In midfield Joshua Kimmich did what Joshua Kimmich usually does, with Ermedin Demirovic grabbing the headlines with two goals against Schalke. Vincenzo Grifo played well, and Christopher Nkunku also grabbed a brace for Leipzig.

The Winners and Losers from Bundesliga Matchday 1

The Bundesliga returned this weekend with the first round of matches in what should prove to be a very interesting season. As usual we were treated to superb atmosphere, top talent, great goals, and entertainment […]

After two consecutive defeats without scoring, Werder got back to winning ways and secured only their second home win of the season with a 1-0 victory over Hertha Berlin in a game that looked destined […]