Bayern Munich cruised to a 5-0 Champions League win over Viktoria Plzeň at the Allianz Arena with Leroy Sané producing a superb display with two goals to add to the goal he scored against Bayer Leverkusen at the weekend. It was quite the performance in the hour that he was on the pitch.

Julian Nagelsmann rotated his team slightly for the visit of Czech minnows Plzeň and ahead of the Klassiker on Saturday, but Leroy Sané was picked to line up alongside Serge Gnabry and Sadio Mané with Jamal Musiala playing slightly withdrawn behind the front three. 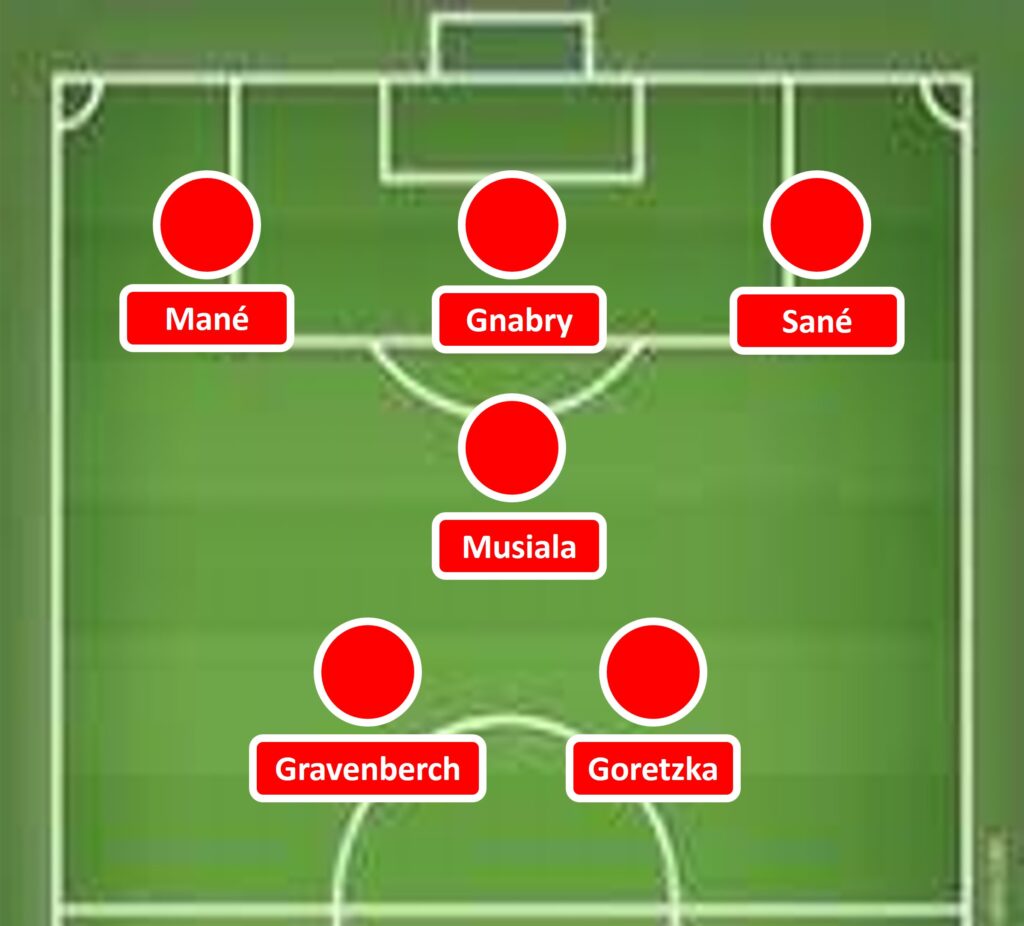 It took Sané just three minutes to open the scoring for Bayern at the weekend, but he was four minutes slower tonight with his first goal arriving in the seventh minute. Noussair Mazraoui initially won a header on the centre circle and Sané took control of the ball. Picking up speed, he played a one-two with Jamal Musiala before effortlessly bypassing two defenders and finishing powerfully from the edge of the penalty area with a left-foot shot into the top corner.

It didn’t take them long… 🤩

Leroy Sané makes it 3⃣ goals in 3⃣ games so far this #UCL campaign with this absolute screamer! pic.twitter.com/L4qLHN26Ce

Bayern were up and running and it wasn’t long before goals from Gnabry and Mané had them 3-0 up and cruising. There was no let up in the second half with another superlative goal from Sané five minutes after the restart.

This time Mané was the provider playing Sané through in the centre. He elegantly cushioned the ball first-time on the edge of the penalty area with the outside of his instep and then finished it with his left all in one sublime movement. He has now scored in all three of Bayern’s Champions League matches this season.

Sané’s goals will grab the headlines, but his work rate was excellent, and he chased back to help defend whenever required. This was Sané at near to his very best and his name is surely going down on Julian Nagelsmann’s team sheet for the upcoming clash with Borussia Dortmund. His removal and replacement by Mathys Tel on 58 minutes lends credence to this.

Julian Nagelsmann: “The boys did well. The game was decided very quickly. Then something splashed along. It was a very serious approach and the right game to see that we’re going in the right direction. Everyone did well. Not everyone has the rhythm, but I’m happy with everyone.”

Leon Goretzka: “Nine points from three games with a decent goal difference. That’s the summary of the first games. We kept our discipline in the first half and implemented Julian’s instructions well. You could see that the opponent was well analyzed. It was a successful evening. But you can’t get too carried away. Still, we’re on the right track.”

Sadio Mané: “The team’s performance today was great from start to finish. We created a lot of chances and scored five goals. It was definitely a deserved win. It’s been a difficult few weeks, but we’ve started well again after the international break with wins. We hope to continue like this until the end of the season.”

The long-running transfer saga involving Bayern Munich and Leroy Sané shows little sign of letting up with the German champions and Manchester City still €10 million apart in their valuation. The question is: can the […]

Claudio Pizarro- A Career in Numbers

With the curtain coming down on the career of Bundesliga legend Claudio Pizarro, we though we’d take a look back at his time in Germany with Werder Bremen, Bayern Munich, and Köln by looking at […]

Mathys Tel: The Real Deal or Another Bayern Prospect Who Will Disappear?

We have been here so often with Bayern Munich and young talent. The Bavarians are one of the top clubs for scouring Europe for top young talent to bring to the club, They are not […]