Matchday 11 from the 2. Bundesliga saw Hamburg maintain top spot despite being denied a win with late drama. Bielefeld and Fürth continue to struggle at the bottom of the pile with Darmstadt and Paderborn keeping tabs with the leaders. Elsewhere, there was no winning start for new Nürnberg coach Markus Weinzierl.

The weekend opened on Friday with Karlsruher SC heaping more misery on bottom side Arminia Bielefeld by beating them 2-1 at the Schüco Arena. Fabian Schleusener opened the scoring in the 43rd minute but the home side got the scoreline level when Janni Serra scored seven minutes into the second half. They were however only level for two minutes as Marvin Wanitzek added a second for the visitors. Die Arminen relegated from the Bundesliga now find themselves in real trouble in the 2.Bundesliga.

Friday also saw Greuther Fürth condemned to spend another week in the bottom two after a 2-2 draw at Jahn Regensburg. Kaan Caliskaner scored twice for the home side but Fürth earned a share of the spoils with goals from Damian Michalski and Simon Asta.

Darmstadt cemented second spot on Saturday by notching up their third win on the trot although it took a 73rd minute header for defender Patric Pfeiffer to overcome Fortuna Düsseldorf. Paderborn also kept themselves within touching distance of the top with a 3-0 away win at Hansa Rostock. They dominated the first half and scored through Ron Schallenberg before the hots put up a much better fight in the second period. However, goals from Robert Leipertz and Marvin Pieringer in the last ten minutes sealed the win at the Ostseestadion.

The improvement in Eintracht Braunschweig continues as they beat St, Pauli at home to move up to 11th. The visitors opened the scoring in the 68th via Manolis Saliakas, but Immanuel Pherai equalised ten minutes later for Michael Schiele’s side. When a draw seemed on the cards, Pherai popped up in stoppage time to score a 94th minute winner to turn the game totally in the hosts’ favour.

The late game on Saturday was full of late drama as leaders Hamburg were denied a sixth consecutive win by Kaiserslautern. Die Rothosen looked on course to keep their winning run going with a Robert Glatzel goal in the first half and when they were awarded a penalty in the 81st minute the three points seemed in the bag. Sonny Kittel however saw his spot kick saved by Andreas Luthe and almost immediately the visitors stormed up the other end with Lex Tyger Lobinger turning home Kenny Prince Redondo’s left wing cross to stun HSV and take a point.

1.FC Nürnberg’s new trainer Markus Weinzierl didn’t make a winning start to life with der Klub as he oversaw a 3-2 defeat against Holstein Kiel in his first game in charge. Despite Lino Tempelmann giving them the lead five minutes before the break, three goals from the visitors in the second half turned the game (two from Steven Skrzybski and one from Fabian Reese). A consolation from Christoph Daferner proved too little, too late.

At the top end Heidenheim moved into fourth with a 2-1 win over Hannover after three consecutive draws. Goals from Denis Thomalla and Tim Kleindienst put them in control before a late 92nd minute consolation from Cedric Teuchert.

Sandhausen sent Magdeburg down to 15th in the table with a 1-0 win courtesy of Christian Kisombi’s solitary goal. 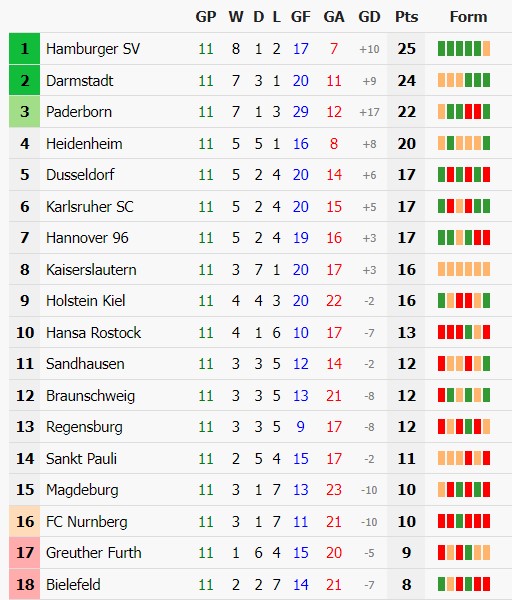 Judging by the coverage I’ve seen, you might be surprised to learn that Germany’s second division also returned to action over the weekend. Granted, if you aren’t paying for Fox Soccer Match Pass (at least […]

The weekend action got under way on Friday evening with Darmstadt looking to end a good week with another three points to extend their lead at the top of the table. However, after their midweek […]