Matchday 12 from the 2.Bundesliga saw a change at the top following the Hamburg Stadtderby, but no change at the bottom as Arminia Bielefeld’s struggles continue. New Nürnberg coach Markus Weinzierl got a first win, but Magdeburg have that sinking feeling.

The weekend opened on Friday with the much-anticipated Hamburg derby at the Milllerntor. Leaders Hamburg suffered a chastening 3-0 defeat to city rivals St. Pauli in an event-filled match.  HSV captain Sebastian Schonlau was sent off for a professional foul after just 28 minutes giving the visitors and uphill task to combat the crowd and an extra man. They did so until the 61st minute when Eric Smith headed in Marcel Hartel’s corner. Hartel scored himself in the 74th minute (his third of the season) before David Otto put the icing on the cake with a third on 89 minutes heading home Lars Ritzka’s left-wing delivery.

Friday also saw Greuther Fürth climb out of the bottom two with a 2-2 draw at home to Hansa Rostock. Branimir Hrgota and Ragnar Ache scored for the hosts with Lukas Fröde equalising in between. John Verhoek saw red before a 93rd minute penalty from Ryan Malone rescued a point for the visitors.

Darmstadt reclaimed top spot in the table on Saturday with a 2-1 win at Karlsruhe that took patience. Fabian Schleusener gave the home side the lead in the first period before Patric Pfeiffer got Darmstadt back on level terms four minutes into the second. They thought they had scored on the hour only to see Pfeiffer’s effort ruled out. The visitors kept plugging away and were rewarded in the 88th minute with a Phillip Tietz winner.

After defeat in his first game in charge last week, Markus Weinzierl got his first three points as Nürnberg coach with a 1-0 away win over Fortuna Düsseldorf. Kwado Duah’s goals just after half time was enough to seal the win at the Merkur Spiel-Arena. Bottom after matchday 6, Eintracht Braunschweig’s improvement continued with a 2-0 win at Magdeburg to make it six games without defeat. Their opponents however dropped into the bottom two.

Arminia Bielefeld’s woe continued at Hannover, where they suffered a 2-0 defeat. Cedric Teuchert scored right at the start (4) and Harvard Nielsen headed in at the end (86) to see die Roten climb to fifth and root die Arminen to the bottom of the pile. Paderborn also took advantage of HSV’s defeat on Friday to move into second in the table. A comfortable 3-0 win over Sandhausen came with goals from Marvin Pieringer (his seventh of the season), Robert Leipertz (fifth of the season) and Jannis Heuer.

Holstein Kiel moved up to sixth in the table thanks to a 3-1 home win over Heidenheim. Denis Thomalla gave the visitors the lead in the first half, but Kiel hit back with two goals either side of the interval from Steven Skrzybski and a third from former Bayern striker Kwasi Okyere Wriedt. Two headed goals from Andreas Albers and another goal from Prince Osei Owusu gave Jahn Regensburg a surprise 3-0 away at the Betzenberg over Kaiserslautern. 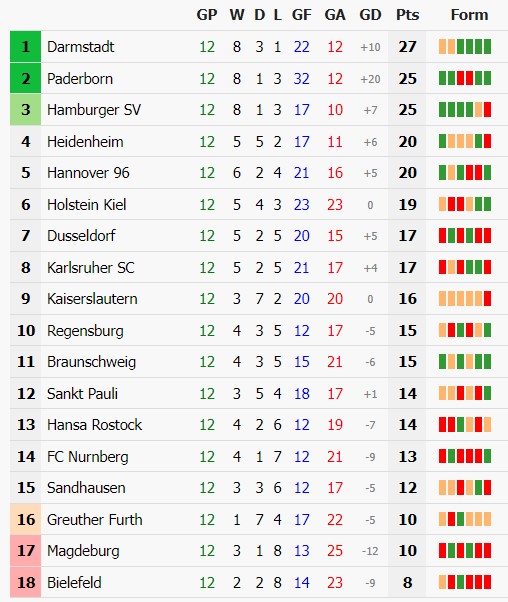 Is History Repeating Itself at Hamburger SV?

When the mighty Hamburger SV were relegated from the Bundesliga for the first time back in 2018, while a shock, it was felt that a club of their magnitude would instantly bounce back at the […]

The sixth matchday of the 2.Bundesliga provided plenty of goals, late drama, a share of the spoils in the top of the table clash and more trouble for those at the bottom. Here’s a round-up […]