The fourth matchday of the Frauen Bundesliga has been completed with VfL Wolfsburg maintaining their 100% start to the season and Bayern continuing to keep tabs on the leaders. Hoffenheim triumphed in the Baden derby, while Turbine Potsdam and Werder Bremen await their first wins.

On Friday Hoffenheim had to come back from being 2-1 down at half time to beat Freiburg, but with goals from Katharina Naschenweng and substitute Tine De Caigny in the last ten minutes they took all three points.

In a repeat of last season’s DFB Pokal final VfL Wolfsburg beat Turbine Potsdam 2-0 on Saturday with goals from Alexandra Popp and Ewa Pajor. The She-Wolves now turn their attention to the Champions League which kicks off in midweek against Austrian champions SKN St. Polten.

Bayern Munich kept tabs with Wolfsburg at the top of the table with a 4-0 home win over 1.FC Köln. Linda Dallmann gave the hosts a first half lead before three second half goals put the result beyond doubt. An own goal Myrthe Moore (48), one from Tainara de Souza da Silva (69) and one from Lisa Magull (83) completed the scoring. Bayern are two points behind Wolfsburg, who they face next weekend after taking on Rosengard in the Champions League.

SV Meppen bagged their first win of the season with a 1-0 away win at Bayer Leverkusen thanks to a 62nd minute penalty dispatched by Lisa-Marie Weiss. Eintracht Frankfurt kept pace with Bayern on ten points with 4-0 away win at SGS Essen. Goals from Camilla Küver and Tanja Pawollek came either side of Jacqueline Meißner being sent off. Two second half goals from Shekiera Martinez made the result a formality.

Werder Bremen’s goalless draw with MSV Duisburg means they are still waiting for their first win of the season. 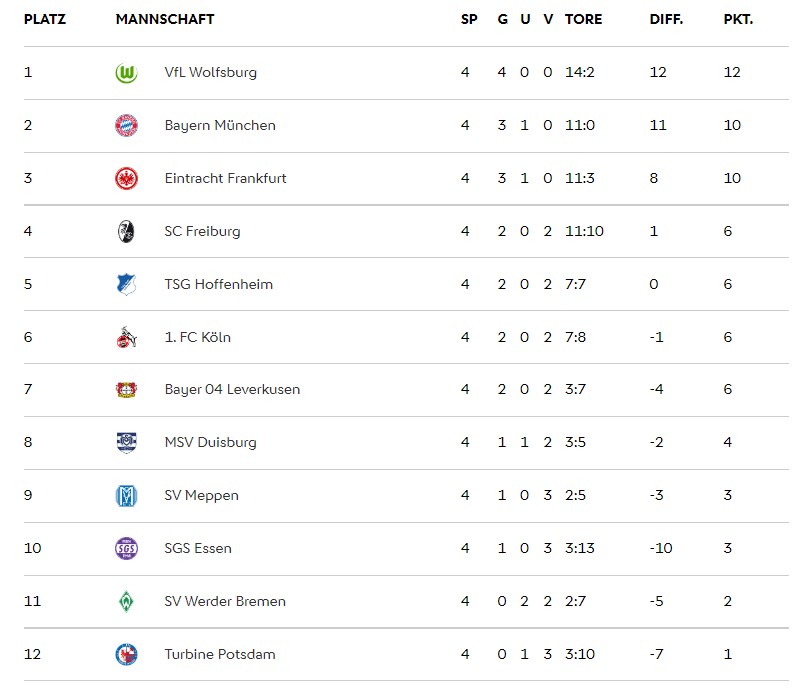 The women’s Bundesliga kicked-off a couple of week ago and the usual suspects have set the early pace. Having won the women’s title seven times in the last ten years VfL Wolfsburg are one of […]

Frauen-Bundesliga: Dream Signings from the NWSL

The long-rumored blockbuster transfer finally happened: Sam Mewis, one of the best box-to-box midfielders in the world, left the American club North Carolina Courage yesterday for Manchester City of the FA Women’s Super League. Her […]

The 2020/21 Frauen-Bundesliga season kicks off this Friday, September 4, when defending champions VfL Wolfsburg take on SGS Essen in a rematch of the DFB-Pokal final. Like the men’s Bundesliga, all 12 Frauen-Bundesliga clubs will […]