The weekend action got under way on Friday evening with Darmstadt looking to end a good week with another three points to extend their lead at the top of the table. However, after their midweek Pokal victory over Borussia Mönchengladbach, the Lilien were only able to draw 1-1 at tome to Holstein Kiel. The visitors took a 35th minute lead through Steven Skrzybski, but a second half equaliser from Matthias Bader squared things. Results elsewhere meant that Darmstadt kept top spot come Sunday night.

The second match on Friday saw Kaiserslautern beat Hansa Rostock 2-0 at the Ostseestadion thanks to a brace from Terence Boyd and with a little help from Hansa keeper Markus Kolke, whose big error saw Boyd’s header go through his legs for the opener.

On Saturday Nürnberg and Hannover played out a goalless draw in Bavaria in a game with little goalmouth action following both teams’ midweek cup exertions. Paderborn were also held to a 0-0 draw at Eintracht Braunschweig and therefore missed the chance to take over at the top of the table. Jahn Regensburg however, recovered from their midweek Pokal exit at the hands of Fortuna Düsseldorf with a 2-0 win over Sandhausen at the Jahnstadion. A first minute own goal from Aleksandr Zhirov gave them the ideal start, but Alexander Esswein equalised on 12 minutes to restore parity. The winning goal arrived in the 70th minute from Andreas Albers.

Arminia Bielefeld climbed off the bottom of the table with a 2-0 home win over St. Pauli. Two goals in the last fifteen minutes from substitute Janni Serra secured the first win after four successive defeats and compensated a little for the hammering they received in midweek from VfB Stuttgart in the cup. The next stage is to exit the bottom two for die Arminen.

On Sunday Hamburg suffered a second successive league defeat and third in a row if you count the midweek Pokal loss. It was a successful return to the Volksparkstadion for ex-trainer Christian Titz, whose Magdeburg side won 3-2.  They took a two-goal lead via Mo El Hankouri and Baris Atik with Ransford Yeboah Königsdörffer pulling one back. He thought he had equalised soon after only for VAR to cancel his effort.  Julian Rieckmann made it 3-1 late on with time for Tom Sanne to head in an injury-time goal to make it a tense finish.

Heidenheim stay fourth after a 3-1 home win that sent Greuther Fürth to the bottom of the table. First half goals from Patrick Mainka and Tim Kleindienst put the hosts in from with Branimor Hrgota pulling one back seven minutes into the second half. A Jan-Niklas Beste penalty sealed the win however.

Fortuna Düsseldorf followed their away win the cup with a 2-0 away win over Karlsruher SC. A brace from Swede Kristoffer Peterson in the first half gave all three points to the visitors and took them out of mid-table. 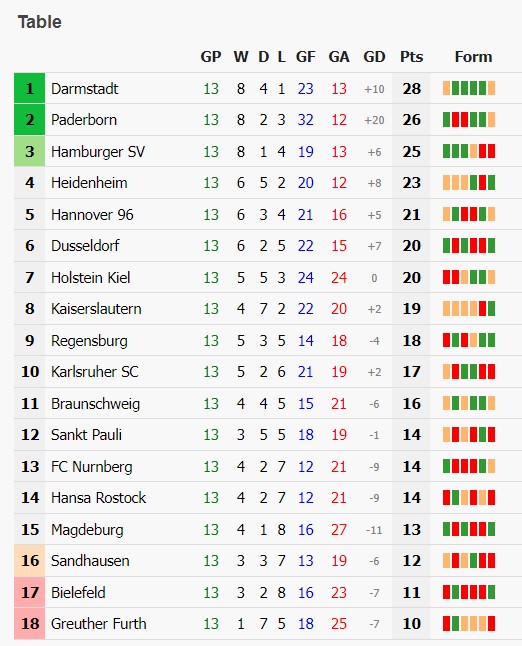 Another Positive Covid-19 Test at Dynamo

Dynamo Dresden received news Thursday of a new positive from their fifth round of Covid-19 tests, as announced on the club’s website. The club has already had to watch the 2. Bundesliga’s matchday 26 without […]

Last season Bundesliga, this season heading for the 3.Liga. Something is clearly not right at Arminia Bielefeld as last season’s relegated side are really struggling in the second tier- not just struggling but looking like […]

Darmstadt held onto their top spot in the 2.Bundesliga table despite a second successive draw. HSV moved above Paderborn as the three-way battle between themselves, Paderborn and Darmstadt hots up. There was a debut win […]