The fifth matchday of the Frauen Bundesliga has been completed with VfL Wolfsburg beating Bayern Munich in the battle of the league favourites. Eintracht Frankfurt remain unbeaten whereas Werder Bremen and Potsdam still await their first wins.

On Friday SV Meppen handed Turbine Potsdam their fourth defeat of the season with Lisa Josten scoring both goals in the second half. The Saturday match saw SC Freiburg beat Bayer Leverkusen with all five goals in a highly entertaining first 45 minutes. Janina Minge opened the scoring for the Breisgauer in the 4th minute with Caroline Siems levelling on 11 minutes. Three goals were then traded in a six-minute spell before the interval. Swiss Svenja Fölmli scored for the hosts on 38 minutes before Minge added a third two minutes later. Juliane Wirtz pulled one back to make it 3-2, but remarkably there was no further scoring in the second period.

Essen versus Hoffenheim also finished 3-2 but in the favour of the visitors from Sinsheim.  Julia Hickelsberger-Füller scored for Hoffenheim early on with Katharina Piljic equalising. Ereleta Memeti restored the lead in first half stoppage time only for Maike Berentzen to level things again. The winner came in the 88th minute from sub Gia Corley.

The big clash between title favourites Wolfsburg and Bayern Munich drew a crowd of 21,287 at the AOL Stadion (a record attendance for the She-Wolves) and it was the reigning champions and host who triumphed.Ewa Pajor and Svenja Huth were on target for the Green-and-Whites with Klara Bühl replying for the visitors.

Also on Sunday Eintracht Frankfurt beat MSV Duisburg 3-2. Laura Freigang and Kaitlyn Parcell scored in the first half to make it all-square at the break. Freigang’s penalty restored the home side’s advantage, and she completed her hattrick on 58 minutes. A goal from Duisburg’s Ashley Clara Leonhart made it an interesting finish, but the match ended in Frankfurt’s favour.

The final match of the weekend saw Köln dispose of Werder Bremen 2-0 with goals from Jana Beuschlein and a Mandy Islacker penalty. 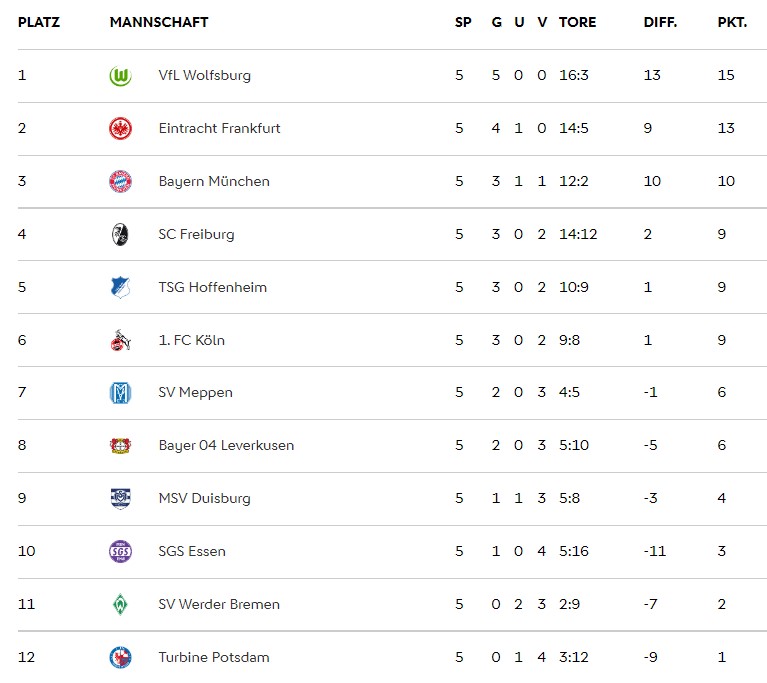 The 2020/21 Frauen-Bundesliga season kicks off this Friday, September 4, when defending champions VfL Wolfsburg take on SGS Essen in a rematch of the DFB-Pokal final. Like the men’s Bundesliga, all 12 Frauen-Bundesliga clubs will […]

Frauen-Bundesliga: Dream Signings from the NWSL

The long-rumored blockbuster transfer finally happened: Sam Mewis, one of the best box-to-box midfielders in the world, left the American club North Carolina Courage yesterday for Manchester City of the FA Women’s Super League. Her […]

The fourth matchday of the Frauen Bundesliga has been completed with VfL Wolfsburg maintaining their 100% start to the season and Bayern continuing to keep tabs on the leaders. Hoffenheim triumphed in the Baden derby, […]