With the World Cup and the the mid-season break coming up, a host of Bundesliga sporting directors are going to be very busy in contract negotiations as they have players whose current deals expire at the end of the season. Amongst them are some highly sought-after players, combined they make quite a team. Here’s a Bundesliga XI of players looking to either sign or be signed. 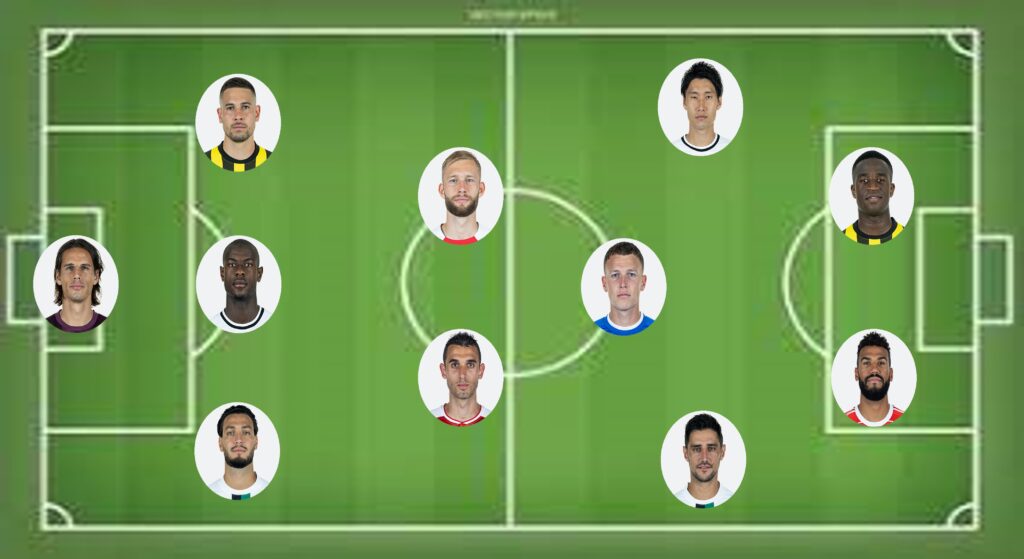 Alongside Manuel Neuer, the Swiss keeper is rated by many as the best goalkeeper in the Bundesliga and as such has plenty of admirers. His record-breaking performance against Bayern when he made 19 saves will only have attracted more suitors should he be looking for a deal elsewhere. He was reportedly offered a contract by Manchester United in the summer, and there are bound to be more offers on the table this January.

The Portuguese fullback reportedly is keen on staying with the Schwarzgelben, but initial talks haven’t started yet. BVB may be stalling due his recent injury history and they were linked with a move for David Raum in the summer before he joined RB Leipzig. Juventus are said to monitoring his situation.

The 28-year-old has been a mainstay of the BVB back line over the past few seasons and going forward there are few finer left backs in the Bundesliga. The club do have highly rated youngsters Tom Rothe and Prince Aning waiting in the wings.

Frankfurt’s sporting director Markus Krösche said in the summer: “If the players don’t extend the contract, the situation automatically arises that we have to sell.” That is exactly the situation the Adler find themselves in with centre back Evan Ndicka.

The club want to extend with Ndicka, but the player is stalling amidst interest from Arsenal, Tottenham, and Juventus. Bild are reporting that Eintracht would be prepared to sell him in January if they receive a bid in the region of €15 million.

Aside from his aberration against Werder Bremen, Bensebaini has been on top form this season and one of the best full backs on display. He has made no secret of his ambition and a move to a ‘bigger club’ is definitely on the cards- it is just a question of when.

The likes of Juventus, Inter and Paris Saint-Germain have all been linked and the fact that he could be picked up for free at the end of the season makes him an even more attractive prospect.

Midfielder Skhiri has proved over the past seasons that he is one of the leading players in his position and Köln would dearly love to hang onto the 27-year-old Tunisian.

There had been speculation this past summer that he could move but the club were determined to hold onto their prized asset and tried to convince him to sign a new contract at the Rhein-Energie Stadion. “Our clear intention is that Ellyes will play with us next season” Managing Director Christian Keller said at the start of this season.

A summer move to Bayern Munich looked very much on the cards, until the deal collapsed, but it seems highly likely that the Bavarians will be back again to try to sign the RB Leipzig pressing machine. Premier League big spenders Chelsea have also been mentioned as potential suitors for the Austrian.

The Gladbach captain played his 200th Bundesliga game for the club against Frankfurt on Saturday at the Borussia Park, but with his contract running out in the summer, how many more will he rack up for the Foals?

Early indications are that the player, and the club are keen on extending for another year, but you never know in football. At 34-years-old there won’t be a huge queue forming, but if there are indications that his playing time could be more elsewhere, then a possible move could be on the cards.

The Hoffenheim midfielder has some high-profile admirers and the Sinsheim club might have a battle on their hands to keep hold of him beyond this summer. Pep Guardiola is said to have inquired about him back in 2021 and the Manchester City boss has seen him first-hand while Bayern trainer.

He has also been compared to Joshua Kimmich by Joachim Löw in the past. “He’s technically good and has developed well. He’s a player with great perspective.”

The Bayern striker’s impressive form of late is only going to strengthen his hand in any contract negotiations with Hasan Salihamidzic, but the Munich sporting director has intimated that the 33-year-old could still get a new deal at the Allianz Arena.

“Let’s let Choupo play a bit now. He’s doing very well. We know what we have in him, and he knows what he has in us,” he told the Abendzeitung.

When everybody is fit, the Cameroon striker will be down the pecking order, but he has shown recently that he still has goals in him and can provide a Plan B for Bayern.

The burning question as to whether teenage prodigy Youssoufa Moukoko would sign a new deal at Borussia Dortmund was always going to come down to playing time. The signing of Anthony Modeste in the summer to stand-in for Sebastien Haller and the time spent on the bench gave rise to doubts over his future.

Appearances and goals have been forthcoming and the Schwarzgelben are confident that their youngster will sign a new deal. There will however be the temptation of big contracts that are suggested by other interested parties to deal with.

Eintracht Frankfurt are unfortunately a club that are hampered in a way by their own success. The development of Japanese attacker Daichi Kamada into a real star has only attracted more admirers and there will be a queue forming already to take him off the Adler’s hands.

Frankfurt will of course put a new deal on the table for the 26-year-old to make him their highest-paid star, but there will be others (from the Premier League) able to offer more and although he feels at home in Frankfurt, he could soon have a new home elsewhere.

Dortmund still have to agree new deals with Marco Reus, Mats Hummels and Mo Dahoud, but you would think they were formalities. Charles Aranguiz at Leverkusen has plenty of suitors including Espanyol and a host of clubs in Brazil. At 33, it is unlikely Bayer will offer him a longer deal.

Age may also have finally caught up with Makoto Hasebe with Frankfurt saying they will allow him to decide his future. In goal Timo Horn at Köln will want to leave for first-team football after Marvin Schwäbe usurped him, and Union Berlin’s Timo Baumgartl will have clubs after him after his recovery from testicular cancer. Where Anthony Modeste ends up after this season is another interesting question.

There has been much talk in the early part of the season over the merits of Borussia Dortmund playing with a back three or a back four. What should be being talked about at some […]

The Deep Dig: Edin Terzic’s Super Subs Save the Day

Borussia Dortmund came away from the Europa Park on Friday with a 3-1 away win over Freiburg to maintain their 100% start to the season. The simple score line however in no way reflects full […]