The penultimate round of Champions League group stage fixtures are upon us with Bayern travelling to face Barcelona, Frankfurt hosting Marseille and Bayer Leverkusen facing Atletico Madrid in the Spanish capital. Here’s a summary of what the main protagonists have had to say ahead of the midweek European action.

Xavi: “I expect to face a very intense and tactically astute side. We consider Bayern to be one of the best sides in the world. We were very good in Munich, but we didn’t convert our chances. Tomorrow, we have to show that was an aberration.

“Watching the match again, it is amazing that we didn’t score. We have to win regardless of what happens in Milan. We have to show tomorrow that we can be at the level of this type of teams

“We have a small hope. Hope is the last thing to be lost. The misfortune is that we are not dependent on ourselves. We will watch Inter against Viktoria Plzeň together in the dressing room.”

Julian Nagelsmann: “Barcelona are very capable of playing against big teams. In the first leg they could have led 3-0 at the break. In the Champions League you don’t have as many opportunities to catch up as in the league, but that doesn’t take away from the great quality in the Barcelona squad.

It’s always good to strengthen your squad, Barcelona have done that. They have a strong squad, they’re a big club that has had a lot of successes. It’s a huge step from last year to this year.

“We want to win, it’s about first place in the group. But it’s also about winning a prestigious duel, there are two very big clubs in Europe. If you want to play for the Champions League title, you shouldn’t allow yourself too much weakness. It’s also about sending signals outwards and inwards. Tomorrow is another chance to send a signal.”

Matthijs de Ligt: “A game against Barcelona is always difficult, it’s a big game. For every player it’s a game where you need maximum concentration. We want to finish first in the group, so we have to win tomorrow.

Oliver Kahn: “Barcelona is always special. A great club, a great team. There have been lots of encounters in the past. We’re prepared for a big game. We’ve played well lately. Above all, the results have been right. We may have already qualified for the round of 16, but we want to achieve our goal. We want to win the group. That means we won’t give anything away in Barcelona.”

Oliver Glasner: “We feel ready for anything. The games against Leverkusen and Mönchengladbach gave us additional self-belief and I can see that in the players at the moment. We all know that if we’re to stay in Europe beyond the winter, our best bet is to beat Marseille.

“I’m expecting a very tight, physical game, because Olympique obviously know we can no longer catch them if they win. I’m expecting them to line up in their usual 3-4-3 with plenty of man-to-man marking and high intensity. Hrvoje Smolcic will start – we’ll see where exactly tomorrow. Jérôme Onguéné is also back with us and an option. The lads with the most freshness will play tomorrow.”

Djibril Sow: “Our complete focus is on tomorrow’s game and getting the three points. There’s great excitement and we have a lot of self-confidence. We’ve been playing attractive, effective football lately.

“As ever, I try to incorporate my strengths into our game and help my team-mates. The most important thing is to go into the game with positivity and keep concentration and communication levels high.”

Igor Tudor: “The team is ready for a serious game tomorrow (Wednesday) . I think I found the right words. Looking at our four matches in the Champions League, I think we did a good job. I’m happy that we measure up to Frankfurt, the last winner of the Europa League. I see my group focused on this meeting. It will not be easy because we face a team with quality.

“The most difficult thing for a manager is to choose the eleven players and the five substitutes. I love all my players and I think they are all strong and have the quality to play. But unfortunately not all of them can be happy.

“But I have to make choices that I believe, at this moment, are the best for the team. It’s never against someone, it’s for the team. It’s normal for an agent to come like that, and give interviews. It’s really not worth making a story out of it. This kind of thing happens all the time in football and always will… 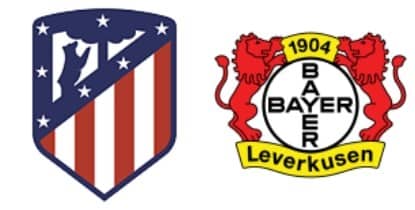 Diego Simeone: “We will face a team that is coming back together, they will be looking forward to the Champions League, they have fast attacking players and it will be a complex game.”

Yannick Carrasco: “The last weekend win was very important, and we have another objective, which is to win tomorrow in the Champions League”.

Xabi Alonso: “The nature of the coach is reflected in the team, in the entire club and among the Atlético fans. Diego Simeone is a great coach and knows how to lead a team and inspire the crowd. But we are prepared for the scenery tomorrow night.

“We saw against Porto that at this level the smallest mistakes are punished directly. That must not happen to us tomorrow.”

Simon Rolfes: “We’re going into the game with confidence. We played a good first leg. Now we’re playing in an atmospheric stadium. We just have to try to make small steps forward. We’re going there to get ahead of Atleti – and for that we have to win.”

Jeremie Frimpong: “All of us in the team know how important the game is. We are ready to give 100 percent tomorrow and throw everything in for victory.”

Having no phone signal or having to pay cash rather than go contactless are such First World problems. The Bundesliga equivalent for Bayern Munich is having an €80 million defender and not being able to […]