Darmstadt held onto their top spot in the 2.Bundesliga table despite a second successive draw. HSV moved above Paderborn as the three-way battle between themselves, Paderborn and Darmstadt hots up. There was a debut win for Alexander Zorniger at Fürth, while Steven Skrzybski’s scoring run continued.

Matchday 14 kicked-off on Friday with the basement battle between Greuther Fürth and Arminia Bielefeld. The all-important three points went to Fürth with new coach Alexander Zorniger enjoying a winning start at the Sportpark Ronhof I Thomas Sommer. A first half goal from striker Armindo Sieb was the winner and saw the home side claw their way out of the bottom two.

Friday evening also saw Magdeburg hosting Heidenheim with the points shared. The home side needed a 93rd minute equaliser from Tatsuya Ito to cancel out the earlier goal scored by Denis Thomalla in the first half.

For the second week running leaders Darmstadt were held to a 1-1 draw on Saturday and missed the opportunity to extend their lead at the top of the table before Paderborn and Hamburg met on Sunday. This week it was St. Pauli, who denied them all three points with Lukas Daschner’s equaliser cancelling out Frank Ronstadt’s superbly taken goal. They remain top, but with HSV winning on Sunday, their advantage is just a single point now.

Fortuna Düsseldorf won the battle of the chasing pack when they overcame Holstein Kiel 2-1 at the Holstein Stadion. An opener from Shinta Appelkamp saw a reply from the in-form Steven Skrzybski, who now has six goals in his last four league outings. An 82nd minute penalty from Dawid Kownacki sealed the points before a late sending off for Düsseldorf’s Marcel Sobottka.

Hansa Rostock enjoyed their trip south on Saturday coming away from Jahn Regensburg with a 3-0 win. Kai Pröger scored twice in the first half with Borussia Mönchengladbach’s Nico Elvedi’s twin Jan Elvedi adding an unfortunate own to make it three. Referee Florian Exner was a busy man handing out six yellow cards in the final fifteen minutes and nine overall.

Markus Weinzierl’s Nürnberg ground out another goalless draw to keep a third consecutive clean sheet at Kaiserslautern. They held Hannover to a 0-0 stalemate last weekend. It may not be pretty, but the points are being picked up to take the Bavarians slowly away from the bottom.

The big game on Sunday at the top of the table saw Hamburg end a run of three matches without a win by beating Paderborn 3-2 at the Home-Deluxe Arena. Robert Leipertz scored twice for the hosts but goals from Robert Glatzel and Jean Luc Dompé drew them level. A winning goal in the 69th minute from Laszlo Benes took the three points and saw HSV leapfrog Paderborn into second in the table.

Havard Nielsen missed a penalty for Hannover, before Hendrik Weydandt scored in the second half to give die Roten a 1-0 win over Karlsruher SC. A red card for Jerome Gondorf didn’t help the visitors, who had to play half an hour with a man less.  Stefan Leitl’s side are now fifth after the win.

Despite having the best of the match, Sandhausen had to settle for 2-2 draw at home to Eintracht Braunschweig. The result sees them drop into the bottom two with Fürth beating Bielefeld on Friday. All four goals came in an entertaining second 45 minutes with Janik Bachmann equalising Anthony Ujah’s opener. Defender Anton-Leander Donkor put Braunschweig back in front before David Kinsombi levelled again. Braunschweig have now gone eight games in the league without defeat. 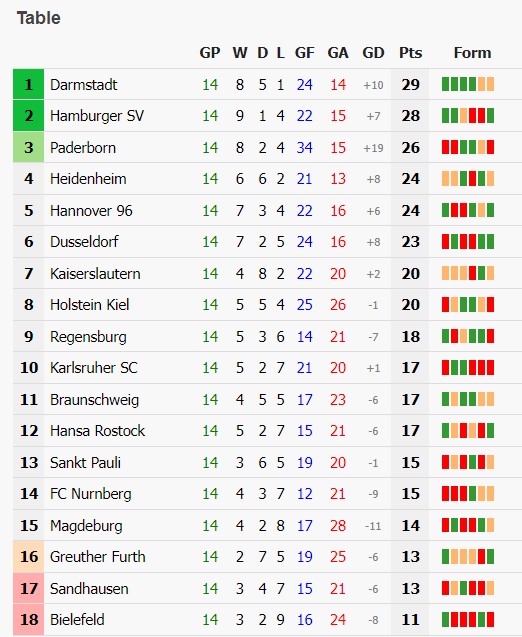 Following their weekend defeat to Karlsruher SC, Nürnberg have announced they have parted company with trainer Robert Klauß. “We regret this decision, but it was unavoidable” explained sporting director Dieter Hecking on Monday. “Robert has […]

Judging by the coverage I’ve seen, you might be surprised to learn that Germany’s second division also returned to action over the weekend. Granted, if you aren’t paying for Fox Soccer Match Pass (at least […]

Another Positive Covid-19 Test at Dynamo

Dynamo Dresden received news Thursday of a new positive from their fifth round of Covid-19 tests, as announced on the club’s website. The club has already had to watch the 2. Bundesliga’s matchday 26 without […]