The final whistle blows, and the dust settles on the previous ninety minutes. But the press soon wants to get the opinions from the Bundesliga trainers whether they have won, lost, or drawn. Here’s what they had to say following matchday 13.

Daniel Farke: “We’ve been going through a difficult phase lately, so the win obviously will do us a lot of good. It wasn’t easy to set up our defence today with the number of absences we have, but the lads really dug deep and it was a top team performance. We were very dominant in the first half and scored two great goals that will make the highlights DVD.

“We focused more on our movement today and had some good deep runs, which made it more difficult to get to grips with us. The momentum shifted after Stuttgart’s goal, but we withstood the pressure and only really allowed them the one real chance in the second half, which Tobi Sippel brilliantly saved. Nevertheless, I think that we absolutely deserved the win today.

Michael Wimmer: “We’re disappointed with the result. Unfortunately, we didn’t make the best of starts, which is something of a recurring issue with us at the moment. We went behind with their first shot of the game. We looked a little shaky after that and Flo Müller made two big saves.

“We started to grow into the game after 25 minutes or so and started to show what we came here to do. After our goal, we looked far more aggressive and braver, and really started to give Gladbach a game. The second half was more even, with us having the better chances, but you have to take those if you want to get a result here.

Edin Terzic: “We absolutely wanted to win the final home game of this calendar year. We showed a good tempo from the beginning and got the early reward. We wanted to keep our foot on the gas once it went to 2-0; unfortunately, that didn’t work so well, and we were also slightly lucky with the offside goal. It was only the tip of a toe that determined whether it was a goal or not.

“It was important to get the home victory. We now have two more exciting challenges ahead. We have created the basis to perform with a lot of self-confidence in them.”

Thomas Letsch: “Congratulations to Edin Terzić and Borussia Dortmund on the 3-0 win. It’s difficult to summarise. It always sounds strange when you sit here and say that you played a decent game. For long stretches, however, we kept the game even and did a good job of implementing the things we set out to do.

“But the crux of football is the goals. We lacked luck up front, and defensively we made glaring mistakes as a team. The manner was absolutely fine today. We were much more compact and courageous than in the past away games.”

Enrico Maaßen: “We are very disappointed, because we took the lead at the perfect time – it’s hard to get an earlier opener. We then conceded an unnecessary goal, where we should have done better at cutting off their runs into the box. It was a very evenly-matched game in the first half, even though it’s impossible to defend against everything Frankfurt throw at you. We delivered another passionate and intense performance and had a huge chance to retake the lead just before half time.

“Frankfurt were strong after the break and it was frustrating that we didn’t defend well enough on the corner they scored from. Regardless, we still had two good chances after that. We need to make sure we take these chances and defend better in those key moments.”

Oliver Glasner: “I’m very happy and satisfied with today. We expected it to be a tough game – Augsburg had previously played extremely well against Bayern München and should have beaten Leipzig. We conceded on their first shot of the game, but my team showed a fantastic reaction once again. We didn’t lose confidence in ourselves, continued to attack and scored a nice equaliser. Kevin Trapp made a vital save before the break, which kept us from going behind once again.

“I was happy with how we played in the second half because we had more control over the game and made sure we remained in Augsburg’s half. After making it 2-1, we failed to make the most of two or three really good chances in order to put the game to bed. That made it thrilling right until the end.”

André Breitenreiter: “Many congratulations to Leipzig on a deserved victory. It’s a very sad day for us. The suspicions have unfortunately been confirmed: Grischa sustained a serios injury, he has fractured his ankle. Further examinations will reveal whether damage has been done to the ligaments, but he’ll be out for a very long time.

“The goal for 1-0 came almost at that moment; a team needs time to get over that. We then started the second half well, but such a simple error in our build-up cannot happen against Leipzig. It was immediately punished.”

Marco Rose: “It was a strong performance from my team. We deservedly went in front, but we of course knew that Hoffenheim could be dangerous. Nonetheless, we defended everything well. After taking the lead, the lads imposed their game. It’s extraordinary to perform like that against such a good Hoffenheim team. I wish Grischa Prömel all the best.

“”It was an important and deserved win from the tea. They performed well from the beginning, and they carried the performance over the 90 minutes. That’s very impressive against a good Hoffenheim side.”

Bo Svensson: “I think we played very well in the first half. We went into the break 1-0 down, but that didn’t reflect the balance of the game. But goals are what count at the end of the day. We kept going in the second half but we weren’t able to create enough chances in the final third. We were lacking the necessary precision today. The second goal killed the game off. Wolfsburg were very clinical and we weren’t.”

Niko Kovac: “I want to congratulate my team, even if the final score is certainly flattering. Thankfully we got the first goal through a set piece. Our game management was good in the second half and we didn’t give them any chances. The team played much better in that half. It’s good to start a week with three matches with a win. Now we obviously want to be successful in our next two games, too.”

Sandro Schwarz: “I think we started the game very well. The double strike was unnecessary, then we came back well. In the first 20 It was difficult for us for a few minutes of the second half. After that we kept improving the result. It’s annoying that we didn’t take at least a point.”

Julian Nagelsmann:”It wasn’t an easy game. We had a few good moments in the first half, it was a wild game. We led 3-0 but didn’t have any clear action. The lead was generally a bit too high. Then we get in a phase in which we didn’t manage that well. It got exciting again. In the end we threw everything in, it was a game that you have to win.” 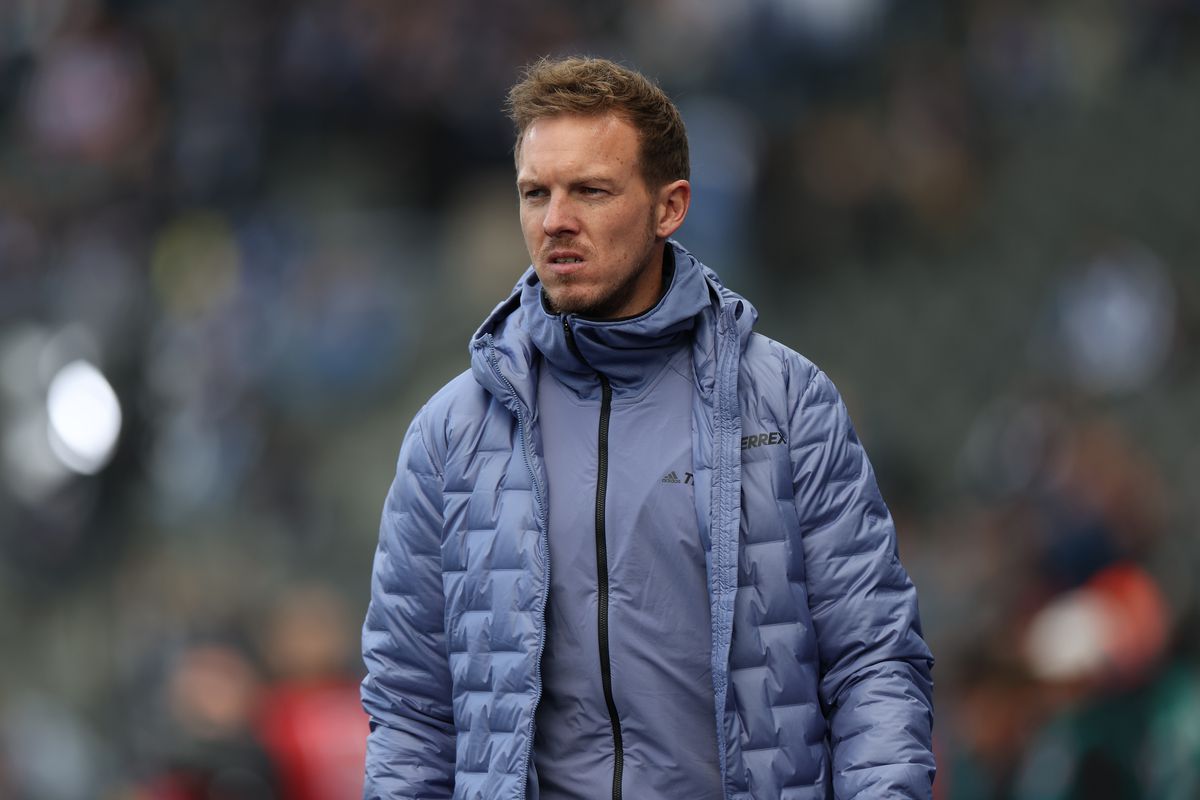 Ole Werner: “As a short-term appraisal, it’s incredible what the boys have achieved so far. I have to compliment them on that. However, 21 points won’t be enough to stay in the league. That’s why, on the other side of the coin, we shouldn’t let that confidence, that we undoubtedly deserve to have, get out of hand. Just because we have shown up in the first third of the season doesn’t mean that we will keep it up. We have to continue to get better.

“Games like today show how close everything is. These sort of games, just like today, can go completely the other way with some more luck for Schalke and if we are a bit less efficient in front of goal. That’s why it’s a nice short time position to be in, but 21 points is not our target for the season. We have to keep working.”

Thomas Reis: “It’s difficult to find an explanation for the defeat so soon after the final whistle. The lads were really active from the start of the game. We wanted to do certain things and be brave. It was disappointing that Alex Král’s goal was ruled out for offside. We were then a bit sloppy and careless and were suddenly 1-0 down. We gave our all once again in the second half. Sometimes just a few minor things lead to you conceding a goal.

“I spoke before the game about wanting to see an improvement and I think the fans saw that, even if the defeat hurts. The team showed today that they are capable of playing in the Bundesliga. We deserved a point in my opinion. We will start collecting points in the future if we continue to play like this.”

Xabi Alonso: “Of course we’re happy with the result, but also with the performance. The first half was very tight, the second was very good, the first goal was very important for us. We still have two games to play in a week, we want more.”

Urs Fischer: “I thought the first half was good, controlled. We fell behind again due to a set piece, which pulled the plug on us a bit. The second goal was a gift. Then you can’t go in like-that was youth football for me. If you do it like that, it’s sometimes 5-0. That was a slap in the face.”

Christian Streich: “For the most part, the team played very concentrated. We knew that Cologne would play from the first minute to the last. But the team played a very good and mature game and deserved to win.”

Steffen Baumgart : “In the early stages we defended with luck and skill. Then we miss two giant chances. Both goals conceded are too easy. Those weren’t good moves. We need to make fewer mistakes.”

Has Enrico Maaßen Turned the Corner at Augsburg?

Four defeats from the opening five matches had the doom-mongers and naysayers predicting tough times for FC Augsburg and a season-long fight to beat the dreaded drop. Two matches and two wins later it looks […]

Christoph Kramer Proving His Worth at Mönchengladbach Under Farke

Sometimes you just have to accept that you don’t fit into a trainer’s plans and take it on the chin that you are going to be a bit part player. That’s what largely happened last […]