Bayern Munich’s 1-0 win in der Klassiker on Tuesday has put them well on course for an eighth successive Bundesliga title with a seven-point lead now opened up over Borussia Dortmund. Joshua Kimmich’s goal took the glory, but it was the display of Alphonso Davies once again that grabbed the attention.

The internet is catching fire at the moment raving about Bayern’s 19-year-old left-back, and his display at the Signal Iduna Park in the title showdown will have done nothing to dampen the hype.

David Alaba’s extremely successful (albeit enforced) conversion to Bayern centre back gave the teenager the chance to shine at left-back and shine he has. It was back in the first Klassiker of the season on matchday 11 that Hansi Flick first realised what a talent he had on his hands at fullback.

“I must admit he surprised me a bit, particularly how he performed against Dortmund and how he defended against Achraf Hakimi and Jadon Sancho, who are two fast, top-quality players” Flick said at the time. “He did really well. I think he’ll bring us even more joy if he can continue to improve in a couple of areas in attack. He’s a young player with a great deal of potential and Bayern will certainly benefit from that.” 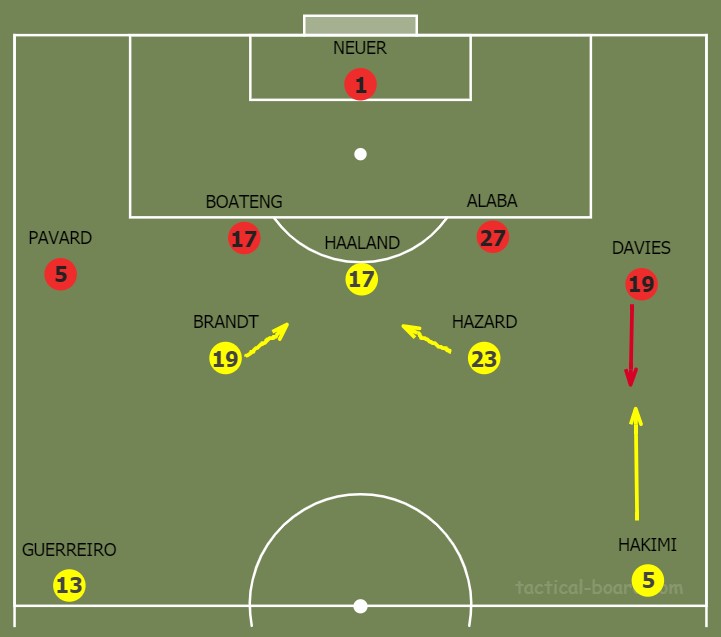 Against Dortmund on Tuesday Flick kept faith with the tried and tested back four of Benjamin Pavard, Jerome Boateng, Alaba and Davies to negate the vibrant BVB attack of Erling Haaland, Thorgan Hazard and Julian Brandt with Achraf Hakimi and Raphael Guerreiro attacking down the flanks.

Davies played his role well in dealing with Hakimi, but it will be ‘that’ moment which will bring all the plaudits. In the 32nd minute a swift counter from Dortmund looked to have Haaland away with the opening goal a formality as the Norwegian raced away from David Alaba. With Alphonso Davies still in BVB’s half, the Canadian turned on the turbo boost to absolutely eat up the yards, get back and deny Dortmund’s goal-machine. It the space of a few seconds, he had raced back (clocked at 35.3 km/h!) and saved a certain goal.

Denying Haaland was a match-winning contribution, but Davies was also heavily involved in the actual game-winning moment- namely Kimmich’s goal.

Bayern had been pressing Dortmund mainly only in Bayern’s own half of the pitch dropping into two banks of four in the defensive phase. Towards the end of the first half though, that press started to be exerted deeper in the Dortmund half and it was Davies positioned high up near the BVB penalty area, who was one of the instigators of the goal just before the break.

The stats don’t lie. Davies had a game high 42 sprints reaching a top speed of 35.3 km/h! Overall, he had 95 touches of the ball, contested 19 duels, and won two tackles. He was booked for a foul on Giovanni Reyna, but it looked very harsh after making a decent contact with the ball first.

He recovered the ball seven times and completed five out of his seven take-ons, while providing two crosses.

Thomas Müller: “He’s a player with a lot of heart and a lot of power, extreme power,” Muller said. “Sometimes maybe he’s not [at his] best position on the field, but he gets the opponent when you think, ‘Oh, I have time, I have time’ and then ‘Meep meep meep meep’ the FC Bayern roadrunner comes ahead and steals the ball.”

He’s barely in the picture when Erling Haaland goes through on goal!

Alphonso Davies: “Obviously being a young player I get caught out of position a lot and I’m happy to have the speed I have,” Davies told the Bundesliga.

“That’s a factor in my game that I use very well, but I think over the years going forward with this team I will definitely learn more about my position, better positioning so it doesn’t look like I’m out of position just running back as fast as I can to catch up.”

Romelu Lukaku (via Twitter): “Alphonso Davies is as fast as f**k”

The long-running transfer saga involving Bayern Munich and Leroy Sané shows little sign of letting up with the German champions and Manchester City still €10 million apart in their valuation. The question is: can the […]