Borussia Mönchengladbach fans must be cursing Lucien Favre right now. Had the former Borussia Dortmund coach not failed to turn his side into serious title contenders, then Marco Rose would still be the captain of the Fohlen ship and hopefully steering them to a second successive Champions League participation. As stands though, it is Rose who is the recipient of the fans’ ire.

BVB’s decision to jettison Favre and install Edin Terzic until the end of the season, instigated Rose activating an exit clause in his contract to take the reins at the Signal Iduna Park next season. The Gladbach vessel has seriously hit the rocks since it was announced he was jumping ship.

A shock 2-1 home defeat to basement strugglers Mainz was followed by a Champions League loss to Manchester City in their round of 16 tie. Their next Bundesliga match saw them give up an early 2-0 lead at RB Leipzig to finally lose 3-2. A quarter-final match-up with future employers Dortmund then brought a 1-0 defeat before this weekend saw a fifth consecutive defeat at home to Bayer Leverkusen.

The Mönchengladbach ultras were understandably furious with their trainer’s decision to head to Dortmund- something that has not been lost on the 44-year-old German coach. The largest Gladbach ultra group posted a banner attached to the stadium on their homepage, which read: “No mercenary is above the club – out with the characterless pig immediately!” 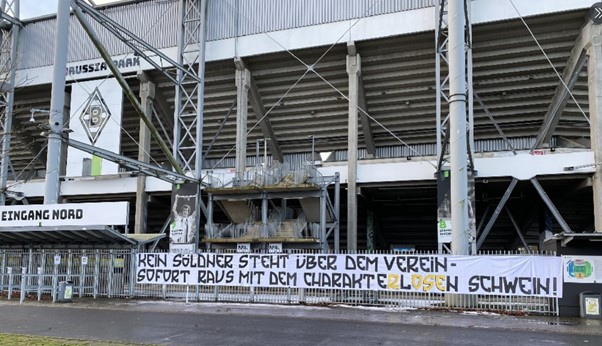 While that might be a little harsh, the fans’ displeasure is more than understandable. Results going against the side with frightening regularity at the present time doesn’t help matters. The Covid-enforced absence of fans from the Borussia Park might actually be a blessing in disguise for the under-fire Marco Rose.

The situation is far from ideal and you have to wonder at the wisdom of letting the cat out of the back so early in the season. There was never going to be a wide acceptance of the decision, but the timing leaves Rose with four months to tread water, with the fans against him and the team struggling to recapture the form of last season. The phrase dead man walking and sinking ship spring to mind.

Max Eberl and the holders of power at the Borussia Park will already be planning their next coaching appointment, but it could well be that their final Bundesliga position has a huge role to play in the identity of their next head coach. The failure to achieve Champions League qualification might rule out some of the names being linked as well as seeing some top players looking to follow Rose out of the club (just not to Dortmund!).

In an ideal world Rose would leave the club on a high with European football lined up for next season, but on current form that looks a pipedream. Rarely however, do the football gods play ball and it could get a lot worse for Marco Rose before it gets better. Will he make it to the end of the season for a semi-amicable departure or will events conspire to make his continued leadership of the Borussia Mönchengladbach ship untenable?

Facebook47Tweet0
About Mathew Burt 230 Articles
Former writer at Goal.com and JustFootball, I've been doing my thing for Bundesliga Fanatic since 2015. A long-suffering Werder Bremen fan and disciple of the Germanic holy trinity...Bier. Wurst und Fußball

He Said What? The Matchday 3 Trainer Soundbites

Facebook2Tweet0 Union Berlin 4-0 Mainz Urs Fischer: “If you win 4-0, you can be satisfied. But we will look at the game again and analyse it. We were efficient in the crucial phases, that gives […]

Facebook40Tweet0 When Bayern Munich clinched their 8th successive title by defeating Werder Bremen on Tuesday all the talk was about how the Bundesliga is once again in a boring cycle. The Bavarians’ dominance in recent […]

Facebook43Tweet0 The 2019-20 Bundesliga season is set to resume this Saturday, May 16, pickig up with Matchday 26. With 25 rounds already played, nine remain to get to the conclusion of what has been an […]