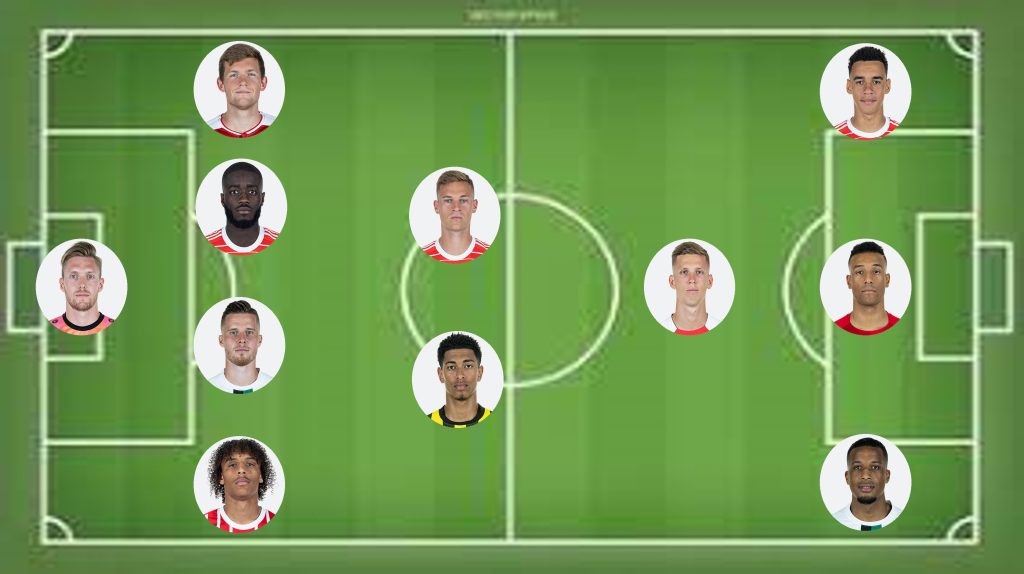 In the 1-1 draw at Stuttgart on Sunday, Leipzig ended with an Xg of 2.13 with VfB keeper Müller the major reason Domenico Tedesco’s side were held to just a point. A series of vital saves in the second kept the Roten Bullen at bay and edged out Dortmund’s Gregor Köbel for the opening spot in the Team of the Week.

Fresh from making his loan move from last season permanent, the 22-year-old put in a fine display against Schalke in the Geißböcke’s 3-1 home win. Kilian opened the scoring in the first half as the hosts looked to take advantage of their man advantage following a red card to Dominick Drexler.

A muscle injury to Lukas Kübler handed Frenchman Kiliann Sildillia only his second Bundesliga start, and he took his opportunity with aplomb. The fullback assisted for the opening goal, won seven of his eleven duels and was impressive all-round in his defensive duties.

With Bayern’s attackers grabbing all the attention with their six goals against Eintracht Frankfurt, the solid defensive display from Dayot Upamecano went a little under the radar. The signing of Dutchman Matthijs de Ligt puts added pressure on Upamecano, but the early signs are that he is not going to give up his place without a fight. He completed 85 passes (2nd overall across the Bundesliga this weekend), and had 105 touches (2nd), while carrying the ball 78 times (2nd) progressing it a total of 410 yards.

With the departure of Matthias Ginter to Freiburg more responsibility now falls on Nico Elvedi in the Gladbach back line and against Hoffenheim he showed his preparedness to step up. A goal capped a fine display with a 97.3% pass completion from his 74 passes.

His quick-thinking for Bayern’s opening goal showed that Kimmich is more than up for the start of the season. The technique to take advantage of Kevin Trapp’s positioning and the smoke was top drawer. One of many top displays from Bayern players in the season opener.

You have to keep reminding yourself that Bellingham is still just 19-years-old. He produced another highly polished, mature display as BVB beat Bayer Leverkusen 1-0 on Saturday, performing well in all metrics such as tackles, pressures, passing.

Leipzig didn’t get off to a winning start, but there were plenty of positive performances from Domenico Tedesco’s men- high amongst them Spaniard Olmo. He assisted Christopher Nkunku’s opener and provided the creative spark throughout.

If you have read any of the coverage of Bayern’s start to the season, you will have been inundated with superlatives regarding youngster Jamal Musiala. There was a belief that he was going to move up a level this season, but the early signs are that he is going to an even higher plane. Two goals against Frankfurt were just the icing on the cake with his dribbling with the ball at pace and intelligent positioning worthy of all the praise going his way.

It wasn’t just Jamal Musiala scoring on the double this weekend with Mainz striker Onisiwo also grabbing a brace. Two headers in each half saw the Nullfünfer to a 2-1 opening day win at Bochum. Onisiwo scored five goals last season with nine assists, so is already looking good to improve upon those figures this time around.

“As a striker, it is of course great to score two goals” Onisiwo said after the match. “I played a lot of games last year and didn’t score too many goals. I need to go on a run and push on. If you get on a roll, the goals come easier. That’s why it is great for a striker to get two. I have to keep at it and become even cooler when the chance comes my way.”

After extending his contract with the Foals on Friday, Alassane Plea put in a top display as Gladbach beat Hoffenheim in their season opener on Saturday. He provided the assist for Marcus Thuram’s goal with an excellent through ball and was a thorn in the Kraichgauer’s side all afternoon.

Jude Bellingham is the Bundesliga’s MVP

Transfermarkt.de have released an update to their market values for the Bundesliga with Jude Bellingham moving clear at the top as the most valuable player in the German topflight. Jamal Musiala and Josko Gvardiol see […]

On the Radar: Nico Elvedi

Rumours that Borussia Mönchengladbach defender Nico Elvedi is on the wanted list of high-profile clubs like Arsenal and Bayern Munich may come as a surprise to some. Delve a little deeper and it soon becomes […]