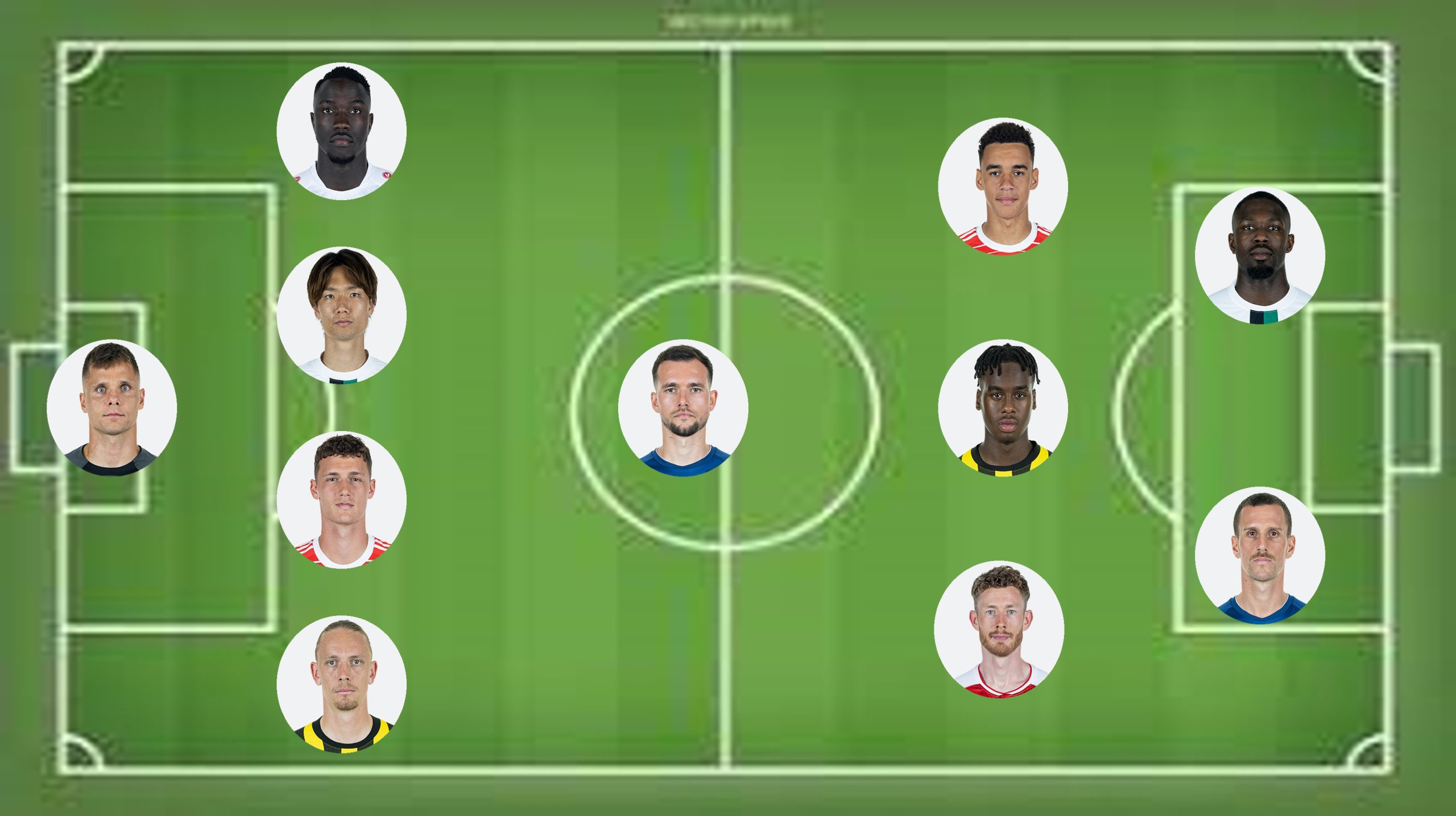 Augsburg’s first win over Bayer Leverkusen in 23 attempts was partly down to the two goals scored by Fredrik Jensen and Andre Hahn, but also in large part to the numerous saves pulled off by keeper Gikiewicz in the second half. An excellent save from a deflected Moussa Diaby shot was the pick of the bunch.

Now that his identity issues have been cleared up, Silas looks set to get back on track with VfB Stuttgart and against Werder Bremen he excelled in a left wing-back role that made the most of his pace and forward thinking. He capped a fine display with a goal, which at the time looked like a deserved winner (Oliver Burke had other ideas).

Bayern have started the season imperiously and often it is a case of which players to put in the Team of the Week. Forwards take much of the attention, but like Dayot Upamecano last week, Pavard shone against Wolfsburg showing what a class act he is.

Gladbach’s summer capture from Schalke has slotted straight into the back line and impressed instantly. Against his former side this weekend, he led the way in terms of touches (124), carries (86), passes (99) and blocks (3).

Wolf only played the second half of Dortmund’s win over Freiburg on Friday, but his cameo performance was more than sufficient to earn him a place in the Team of the Week. He was an upgrade on Thomas Meunier, was involved in the build-up to Jamie Bynoe-Gittens goal and scored an excellent individual goal to make it 3-1 at the end.

After scoring last week in Bochum’s defeat to Mainz, Stöger was once again unlucky to be on the losing side as his side went down 3-2 at Hoffenheim. His central midfield performance however was top drawer His perfect cross found the head of Simon Zoller for Bochum’s second goal.

After an opening weekend win over Schalke, Köln battled to a point away at RB Leipzig and Kainz was heavily involved throughout. His perfect cross allowed Florian Dietz to equalise in the first half and he was busy over the whole game. His involvement in Szoboszlai’s sending off wasn’t his finest moment, but a good overall display.

For a second week in a row Musiala makes the Team of the Week, but based on his current displays, it’s impossible to leave him out. Another mature display beyond his years and another goal to add to the two scored against Frankfurt. Playing between the lines, he showed strength and skill to finish. Un-droppable at the moment for Bayern.

Another of Edin Terzic’s supersubs for Dortmund on Friday. Bynoe-Gittens instantly brought an attacking verve to the BVB side and as Terzic explained after, was a ‘game changer’. His goal may have been fortuitous (aided by Flekken’s flap), but his direct and powerful run at the Freiburg defence led to the second goal for Youssoufa Moukoko.

Out last season from September to April with a cruciate knee ligament injury, Zoller is enjoying being back and showed with a two-goal salvo against Hoffenheim that he is back firing on all cylinders. Bochum are going to need his goals if they are to repeat last seasons Bundesliga survival act.

A goal and an assist from the Frenchman capped a fine afternoon. His flicked pass to Jonas Hofmann for his goal was sublime and his awareness to take advantage of Alexander Schwolow’s spill saw the Foals go 2-1 up.

Jamal Musiala and England- The One That Got Away

As England prepare to face Germany on Monday coming off the back of consecutive defeats to Hungary and Italy, they will have to find a way to stop Germany’s Jamal Musiala. In another world, it […]

Bundesliga Team of the Week Matchday 7

Rafal Gikiewicz (Augsburg) Not for the first time this season Augsburg owe a massive debt of gratitude to their goalkeeper Rafal Gikiewicz for a superhuman display. Having been the hero last week with an injury-time […]

No Identity Crisis as Silas Stars for Stuttgart

Last season was largely one to forget for VfB Stuttgart’s Silas both for on-field and off-field reasons. This season however things are looking up and his matchday 10 performance against Bochum gives hope that he […]