It wasn’t the most extravagant or headline-grabbing transfer of the summer at the Signal Iduna Park with Nico Schlotterbeck and Karim Adeyemi more newsworthy, but the bargain signing of midfielder Salih Özcan could just be the best bit of business Sebastian Kehl has done this transfer window.

Costing just €5 million from 1.FC Köln, the Turkish midfielder is just what the Schwarzgelben have been crying out for and after missing the start of the season with an injury, the 24-year-old is raring to go and proved last weekend against Hertha Berlin that he potentially has a key role to play.

Looking at his displays last season for Köln it is easy to see why BVB sought to bring him in to their midfield area. In terms of successful pressures, he ranked third in the entire Bundesliga with 209 behind only Wataru Endo and Jude Bellingham. For tackles won he ranked joint 8th overall and enjoyed an 84% passing accuracy. He made 73 interceptions putting him 16th overall across all players. His role as the midfield enforcer helped the Geißböcke qualify for Europe and led BVB sporting director Sebastian Kehl to decide he was the right fit.

The departure of Alex Witsel to Atletico Madrid meant a gap needed filling, but Witsel was always more of a ‘pass-master’ than ‘midfield enforcer.’ Jude Bellingham playing in the double pivot as part of a 4-2-3-1 formation is the one who needs license to roam forward and use his natural attacking instincts. He ideally requires an ‘insurance policy’ behind him to allow this. Mahmoud Dahoud has filled the role in the first three fixtures, but in Salih Özcan BVB have possibly found the ideal player. (Emre Can did not cover himself in glory when filling in for Dahoud). 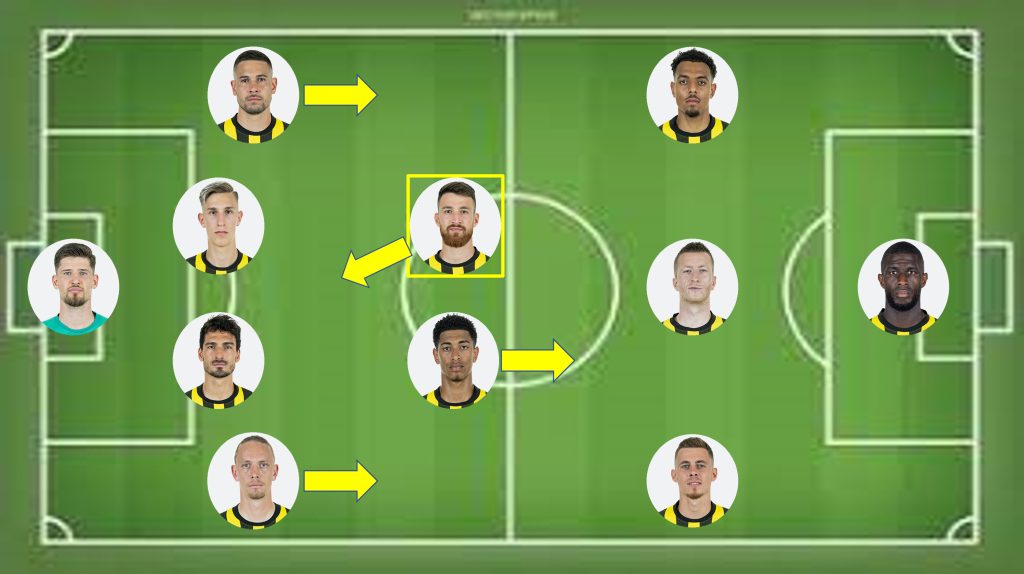 Following an impressive debut against Hertha last weekend, coach Edin Terzic summed it up well saying that Özcan did the dirty work so that others can do the fancy stuff. “Salih is a player who offers something else. He produced an outstanding performance because he did what he does best.

“We have a lot of creativity and pace in the squad. But Salih is a player who offers something other than attractive football. He’s there to cover for his teammates, so that they can have a platform to shine. He was the key reason why we didn’t give away much in the centre of the park today. The number of balls he won for us was at least as important as the goal he set up.”

I suppose the ideal player to hold up as the midfield enforcer, workhorse, who does the ugly stuff so others can take the glory would be Claude Makelele. Dortmund have had talented midfielders down the years, but perhaps for the first time they have found their own ‘mini-Makelele.’

The goals of Anthony Modeste and Karim Adeyemi will be important, the drive of Jude Bellingham will prove vital as will the creativity of Marco Reus, Julian Brandt, Jamie Bynoe-Gittens et al. But perhaps the insurance policy provided in front of the back four and behind the more attack-minded midfielder will see Salih Özcan’s place in the side prove the most important.

The penultimate round of Champions League group stage fixtures are upon us with Borussia Dortmund hosting Manchester City and RB Leipzig entertaining holders Real Madrid on Tuesday. Here’s a summary of what the main protagonists […]

The capture of one of Germany’s most sought-after talents last summer was supposed to give Borussia Dortmund that little extra percentage they needed to usurp Bayern Munich as the top dogs in the Bundesliga. Julian […]

Borussia Mönchengladbach fans must be cursing Lucien Favre right now. Had the former Borussia Dortmund coach not failed to turn his side into serious title contenders, then Marco Rose would still be the captain of […]