New Hertha Berlin trainer Bruno Labbadia made it two wins from two as he watched his side produce a great second half display to beat city rivals Union Berlin. Let’s take a closer look at how die Alte Dame won the day at the Olympiastadion. 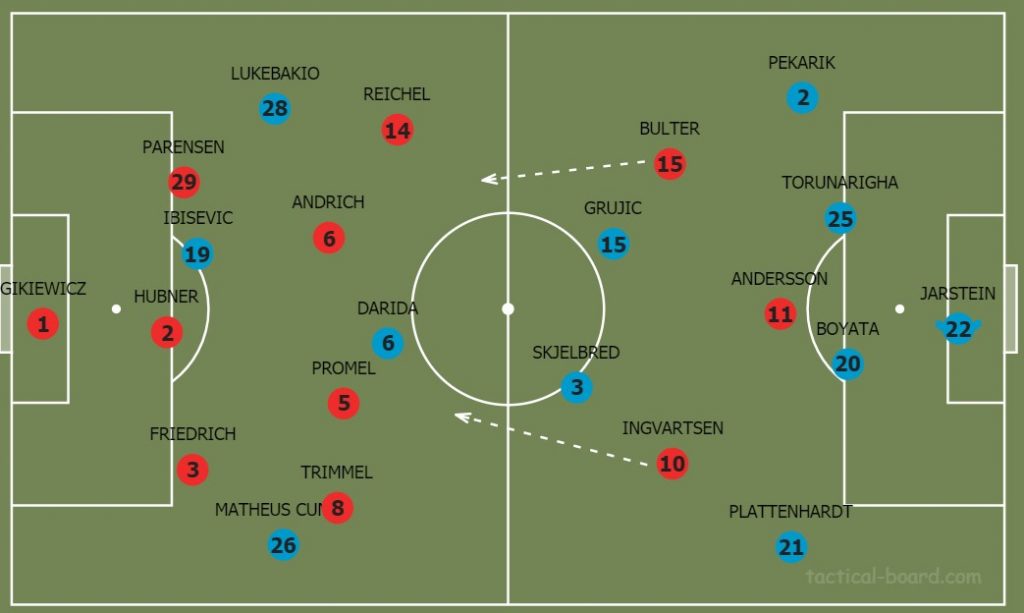 As was to be expected Union made things hard for Hertha by overloading the centre of the pitch. The home side found it very difficult to get a three vs three, or a four vs three at the back, and at times with Bülter and Ingvartsen tracking back, die Eisernen had ten players in their own half with just Andersson left upfield.

Hertha did have chances in the first period, but they struggled to get Dodi Lukebakio in behind the Union defensive line or Matheus Cunha free to create. Union were very disciplined and not overly concerned with creating much themselves. Robert Andrich’s long-range free kick was their only effort of note in the first 45 minutes, 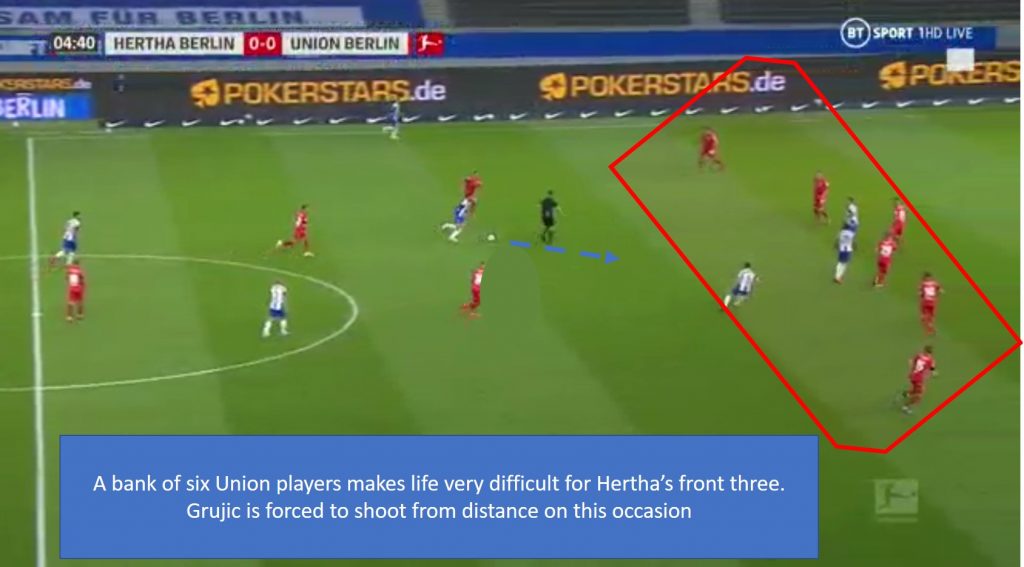 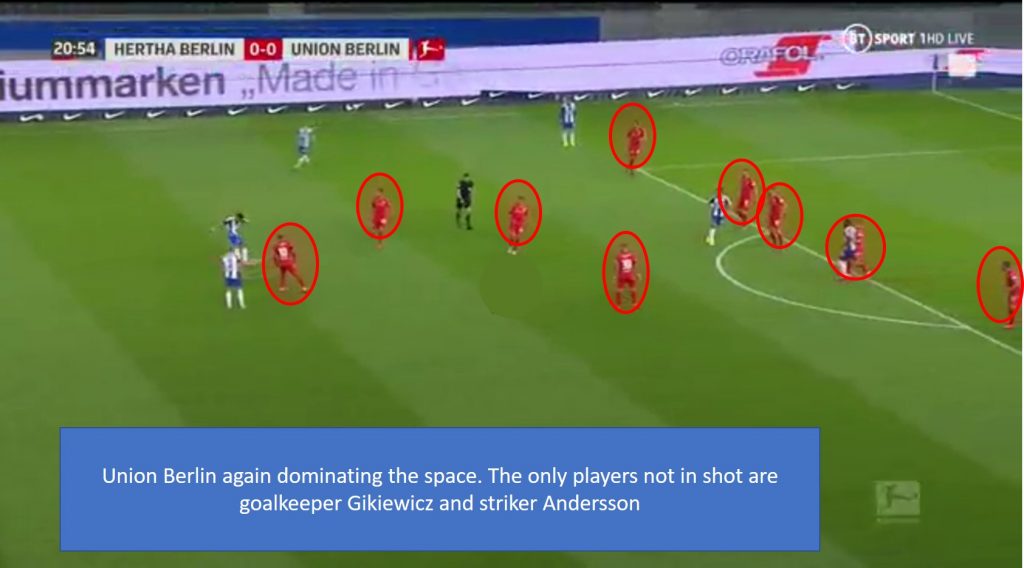 Bruno Labbadia’s half-time team talk must have addressed these issues and right at the start of the second half, they opened the scoring using the wide areas and attacking fullbacks. Just five minutes after the restart, Marvin Plattenhardt was in a much more advanced position than he took up in the first half and was fed to provide the excellent cross for Vedad Ibisevic’s headed opener. 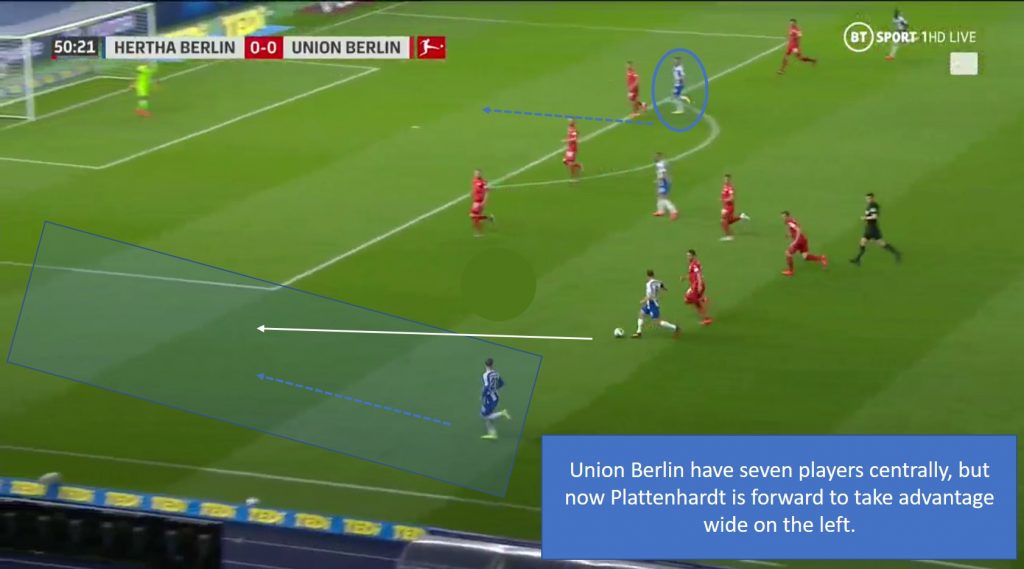 The 2-0 straight from the kick-off again saw Hertha (Lukebakio) getting in behind the Hertha defensive line- Disorganisation following the opening goal was the cause here.

Again, for the third goal Hertha were able to use the space wide to bypass the congested centre and get Matheus Cunha free. With Union turned and running backwards, rather than facing the threat head-on, the chance was eventually created for the Brazilian to score.

It really was a game of two halves for Hertha Berlin. Although on top in the first half, die Alte Dame found it tough going against their city rivals, and few observers would have been predicting four second half goals. The home side’s ability in the second half to bypass the ranks of Union defenders by using the width was they key here. The ‘Labbadia effect’ seems to be in perfect working order right now at the Olympiastadion. 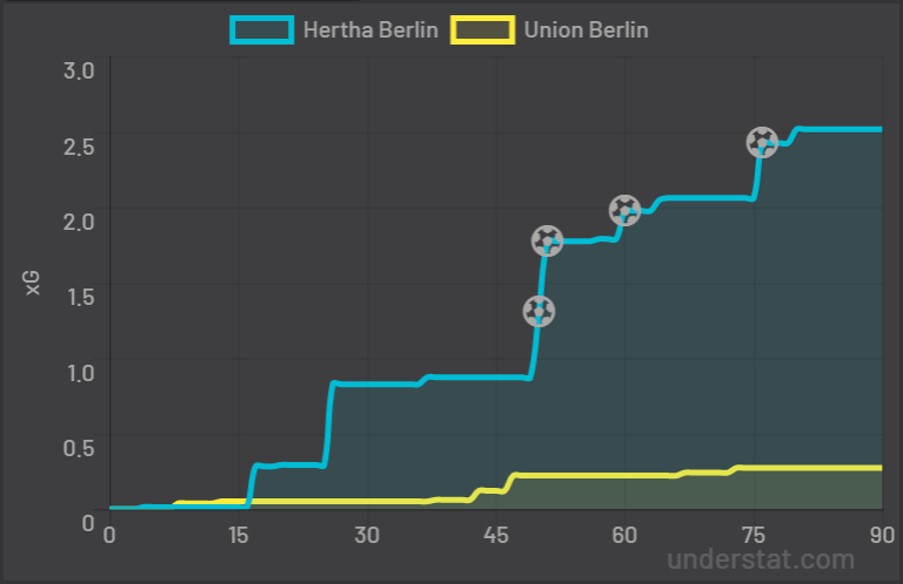 Bruno Labbadia: “We played a very good game against a very well-organised opponent in the first half. I had to make that clear to my team during the break because it got a little negative at the end. We are happy in the end because they are very important points in the relegation battle. It would have been huge if we had delivered such a game in front of 75,000 spectators. But I hope the fans at least had fun in front of their TV’s.”

Vedad Ibisevic: “We know exactly what this game means to our fans and how painful the defeat was in the last derby. We set out to do things differently today. I am pleased we were able to do that successfully, because it really means a lot to our fans. We brought our A game today.

“Every forward dreams of crosses like that from Platte, the kind I always gamble on. I’m happy it went in, but that is my job after all. I’m delighted that things are going so well for me and the team right now.

“Bruno Labbadia gives me confidence and he understands me as a striker, but I’m not getting any special treatment, I’m working just as hard as anyone. He gave me a fair chance and I took it. I’m happy for the team – we have a lot of quality. Unfortunately, we weren’t able to show this at the start of the year, but since the break it’s been a lot better.”

Vladimir Darida: “Of course we’re all really pleased! It’s a shame that we’re not able to celebrate with our fans, but I’m sure they were celebrating in front of their TVs. In the first half we played okay, we had chances, but we didn’t take them.

“Then in the second half we got two very quick goals which really helped us. We really earned the win in the end, and now people can see how good we are and that we’ve been working really hard during the break.”

Hertha Have to Believe the Win is Coming

Even though they wanted to end their run of four successive draws, Hertha Berlin would actually have been delighted to have continued that sequence as the clock ticked down at the Red Bull Arena on […]

Five Questions Ahead of Bundesliga Matchday 25

Can Marco Rose get the Gladbach ship back on course? Since announcing his intention to leave Borussia Mönchengladbach in the summer to take the helm at Borussia Dortmund, the wheels have come off the Fohlen’s […]

Is Union Berlin’s Strength Their Strength in Depth?

After six Bundesliga matchdays Union Berlin fans must have to pinch themselves as they see their club sitting at the top of the table- not sharing the lead, but as outright leaders. They are currently […]