The decision to part company with coach Alfred Schreuder four games before the end of the season could have back-fired in a big way, but fortunately for Hoffenheim, they were able to steer themselves to a sixth place finish and direct qualification for next season’s Europa League. All’s well that ends well as they say.

Dutch coach Schreuder had an almost impossible task right from the start of the campaign. He not only had the unenviable task of succeeding Julian Nagelsmann, but he also had to do it after the club sold some of its best players. Nico Schulz, Kerem Demirbay, Nadiem Amiri and Joelinton all departed, while star striker Andrej Kramaric missed the first eight games with a knee injury.

He started with just one win in the first six matches taking just five points, but then on matchday 7 Hoffenheim produced a stunning 2-1 win over Bayern Munich at the Allianz Arena which had everyone rubbing their eyes in disbelief. That victory over the champions was the start of a record run of six wins on the trot with Schalke, Hertha Berlin, Paderborn, and Köln all dispatched in the league and MSV Duisburg taken care of in the DFB Pokal.

Their winning run however was brought to a crashing halt when Mainz thumped them 6-1 at the PreZero Arena. A 1-1 draw at home to Fortuna Düsseldorf followed successive defeats to RB Leipzig and Augsburg (4-2 at home).  Then did finish the Hinrunde on a positive note though with wins over Union Berlin and Borussia Dortmund.

Trouble was brewing however with club captain Kevin Vogt quitting the armband following the draw with Fortuna saying, “the relationship of trust with the trainer had been disturbed”. It was to be his last match for the club, and he joined Werder Bremen on loan for the rest of the season.

The opening six games of the Rückrunde brought a mixed bag with losses to Frankfurt, Freiburg, and Wolfsburg, but an impressive win over Bayer Leverkusen and a comfortable three points against Werder. Bayern then gained revenge for their defeat earlier in the season by thrashing Hoffenheim 6-0. The match was largely overshadowed by events off the pitch with the game having to be suspended due to the actions of the visiting fans towards TSG owner Dietmar Hopp. 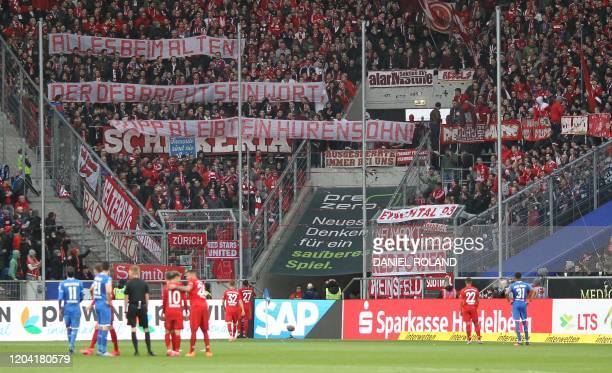 The corona virus then hit and in the first Geisterspiel after the lockdown they slumped to a 3-0 home defeat to Hertha Berlin. Eight points from a possible twelve followed with wins over both Köln and Mainz before the shock announcement that the club had parted ways with trainer Alfred Schreuder due to “differences over the future direction of the squad”.

An interim team of Matthias Kaltenbach, Marcel Rapp and Kai Herdling took control and remarkably manage to steer the club to three wins in their final four fixtures including a stunning 4-0 win over Dortmund on the final day to pip VfL Wolfsburg into sixth place.

It was by no means a conventional season for the Sinsheim club, but for the third time in four years they had qualified for Europe. They had lost both their captain and their coach in doing so and the animosity targeted at their owner reached new levels, but at the end of the day, Hoffenheim had achieved their season objectives.

Such was the 2019-20 season for Hoffenheim that there were plenty of peaks and troughs throughout the season.  Travelling to the Allianz Arena on matchday 7 saw them come away with a stunning 2-1 victory. On his first Bundesliga start, Armenian striker Sargis Adamyan struck twice against the Bavarians to clinch an unlikely three points.

The six-match winning run, which started with the Bayern victory was a highlight, as was the 2-1 home win over BVB, which ended the Hinrunde. Adamyan was once more on target with Andrej Kramaric bagging the other goal.

The win over Bayer Leverkusen was a good one, as was the 4-0 win over Dortmund on the final day with Kramaric scoring all four at the Signal Iduna Park.

For each high there seemed to be a corresponding low this season. The 5-1 embarrassment that was the defeat to Mainz brough the winning run to a grinding halt. Despite the Nullfünfer plying with ten men for the entire second half, they still managed to score four goals in the second 45 minutes. That was the beginning of the end for Kevin Vogt and the way he left the club was a low point of the season.

The 6-0 home loss to Bayern was a low in terms of performance but also a low in terms of what happened off the pitch. Seeing Bayern players and even Karl-Heinz Rummenigge pleading with the fans to stop their idiotic behaviour towards Dietmar Hopp was a new low for the Bundesliga with the game on the verge of being abandoned.

The strange parting of the ways with Alfred Schreuder was also in a strange way a low point of the season even if in the end it all turned out okay.

Hoffenheim scored 53 goals giving them an average of 1.53 per match. That was down quite a bit on the 70 they scored in the previous season. Top scorer was Croatian Andrej Kramaric, who scored 12 goals in just 19 appearances. He missed 15 games this season with knee and groin problems, so his goals return is all the more impressive. Ishak Belfodil underwent knee surgery in October meaning he missed the majority of the season making just five appearances. 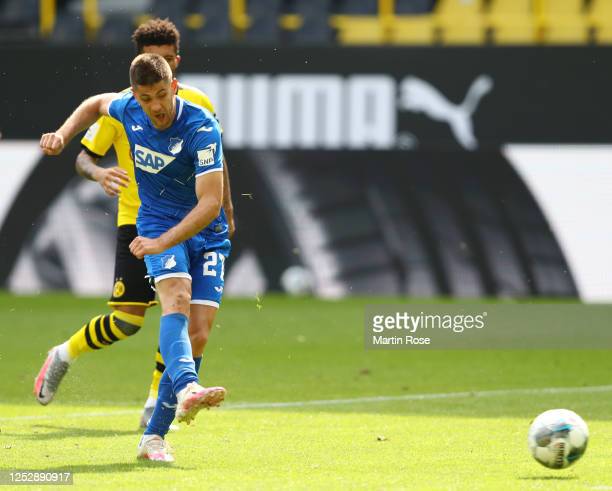 The team didn’t rigidly stick to a set formation with a back three used at times, but they were just as likely to line up with a back four in front of Oliver Baumann. Before the departure of Kevin Vogt, he formed the three along with either Austrian Stefan Posch, Kevin Agpoguma or Benjamin Hubner with Pavel Kaderabek and the converted winger Robert Skov as wing backs. Ermin Bicakcic played 21 (13 as a starter).

They conceded 53 goals which was only one more than the previous season. Stefan Posch ranked third in the Bundesliga overall for tackles won in the defensive third (51) and also third overall for blocks made (82). Pavel Kaderabek ranked fifth in the entire league for crosses from open play (94).

The return of Sebastian Rudy on loan from Schalke proved inspired with the former Bayern midfielder missing just two games and running things in the middle for TSG. Florian Grillitsch and Diadie Samassékou were the other first-choice central midfielders with Dennis Geiger making 13 starts. Grillitsch had the highest pass completion rate (88.8%) on total passing distance.

Ihlas Bebou and Christoph Baumgartner played the more advanced roles, but in terms of assists, it was wing backs/ full backs Kaderabek and Skov who chipped in with the most (7).

Mali midfielder Diadie Samassékou arrived from RB Salzburg for €12 million and showed that he has the potential to be a real star given time. He was a slow burner but established himself well. €10 million was spent on Danish set-piece maestro Robert Skov, and he was successfully converted into a left back/ wing back this season.

Ihlas Bebou was signed from relegated Hannover for €8.5 million but didn’t quite have the season expected. The €1.5 million paid to Jahn Regensburg for Sargis Adamyan was well worth it just for his double strikes against Bayern. The key arrival however was Sebastian Rudy on a loan from Schalke. Whether it can be made permanent is the big question now for Hoffenheim.

The January transfer window saw the €12 million arrival of Munas Dabbur to alleviate the injury crisis amongst the strikers and he quickly got amongst the goals. Jacob Bruun-Larsen was also signed from Dortmund for €9 million.

Player of the Season

Andrej Kramaric grabbed the attention with his 12 goals in 19 appearances and especially with his four-goal haul against Dortmund on the final day, while centre back Stefan Posch was a very solid performer at the back. 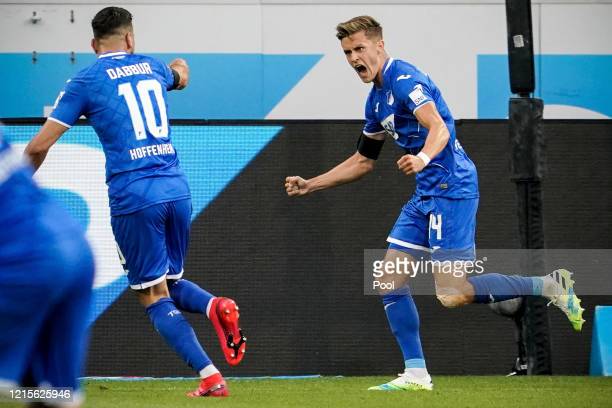 However, it is the breakout season of Christoph Baumgartner that wins it for Hoffenheim this season. Things started slowly for the 20-year-old but six goals in the Rückrunde helped TSG to Europa League qualification. He was versatile enough to play across several attacking positions such as left wing, centrally as a striker or as a number 10.

There were plenty of lows in the season, but in the end Hoffenheim achieved their goal of qualifying for Europe next season. When you consider the quality of the players they lost at the start of the season, the injuries to their main strikers, the loss of their captain in mid-season and the lack of faith ultimately in coach Alfred Schreuder, finishing sixth was a pretty good achievement for the Sinsheim club.

Five Questions Ahead of Bundesliga Matchday 3

With both Bayern Munich and Dortmund losing last weekend, there have already been a few surprises this season and we’ve also had the first coaching casualties of the new campaign. What will matchday 3 throw […]

Bundesliga matchday 9 kicks-off on Friday evening with a clash between Hoffenheim and Werder Bremen at the PreZero Arena in Sinsheim. The hosts were not able to give trainer Andre Breitenreiter the perfect birthday present […]

Schalke suffered a fourth successive loss to heap yet more pressure on their coach Frank Kramer with Hoffenheim (led by former S04 trainer Andre Breitenreiter) running out 3-0 winners at the Veltins Arena. An 11th […]