After it’s absolute failure to capture support last year, the idea of a European Super League is raising its head again, but German giants Bayern Munich and Borussia Dortmund have both confirmed their opposition to such a development.

April 2021 saw the original launch of the so-called Super League involving 12 of the biggest clubs from England, Spain and Italy, but due to massive fan opposition (led by English clubs) the project fell by the wayside after the English clubs withdrew one by one due to the backlash. 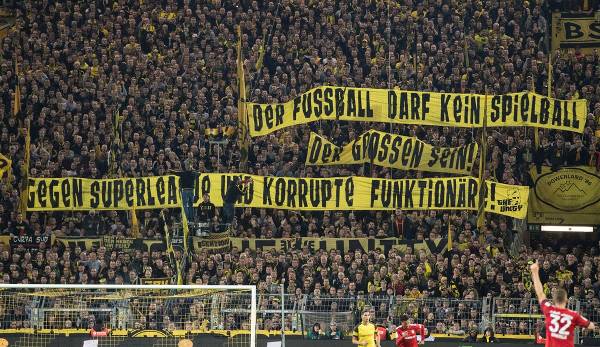 However the new CEO of A22 Sports Management, the German Bernd Reichart (former CEO of RTL) has claimed this week that project still has a future. “It’s very much alive. There are some who want to declare that it is dead, but if they say it a lot, there is much to suspect” he said in an interview with Spanish broadcaster Cadena Ser.

“There are clubs in Europe that surely share the vision of Juventus, Real Madrid and Barcelona, and now they have the opportunity to share what they think. There is a broad consensus that football needs reform. Football cannot continue as it is designed now.”

Bayern Munich, Borussia Dortmund and Paris St. Germain were three high-profile clubs who refused to get involved last time, and both Bundesliga clubs have repeated their oppositional stance this week.

“The attempt at a Super League failed a year and a half ago. Since then, we have always clearly communicated our position” Bayern Munich CEO Oliver Kahn told Bild.

His Dortmund counterpart Hans-Joachim Watzke agreed adding: “The Champions League is an absolutely exceptional format, especially starting in 2024! Also, I feel I am in very good hands with UEFA because they are also keeping an eye on the smaller clubs.”

The Super League’s biggest supporters Real Madrid, Barcelona and Juventus have made a challenge to the European Court of Justice to the monopoly enjoyed by Uefa over international club competitions.

“Until there is certainty from the European Court, it’s unreasonable to think that it could be played before the 2024-25 campaign,” Reichart said. “It’s a long journey, but we have the humility to do it step by step without pause.

“The concept of a fixed [guaranteed] placement is not something that we are currently considering. Sporting merit will be applied to all members of that Super League.

Reichart also confirmed that the Super League would not be played at the weekends and therefore would not affect the domestic competitions.

“The Super League has never been intended to harm the domestic leagues, or the calendar, but we are talking about European competition during the week, yes,” he said.

There will no doubt be another huge backlash from traditional supporters and political institutions, but money talks and by the sounds of it those pushing for the project are not to give up easily.

The Redemption of Jerome Boateng

A week after the last round of fixtures comes the return legs as the Champions League group stage starts really hotting up. The various trainers and players have been giving their opinions on the upcoming […]