It is a problem that nearly every other Bundesliga coach would dearly love to have. Even calling it a problem would seem obscene to many a club struggling to afford such quality, but in the case of Borussia Dortmund trainer Lucien Favre, it is a luxurious problem he nevertheless must deal with.

Giovanni Reyna, Dortmund’s hugely talented youngster was drip fed first-team action last season, but his talent and ambition are such that the 17-year-old is going to be demanding to be given more minutes next season with the Schwarzgelben, who are not exactly short of talented players available to play in the three slots behind the striker in Favre’s favoured system.

The American attacking midfielder was given two starts last season for the final games of the season having previously made 13 substitute appearances after promotion from the u-19 squad. He is improving every day and did himself no harm by scoring BVB’s first goal in pre-season during their recent friendly in Switzerland against Austrian side SCR Altach.

Reyna is too good for the U-19 squad and is Bundesliga ready. The issue for Favre is where and how to play the teenager when he has Julian Brandt, Jadon Sancho, Marco Reus, Thorgan Hazard, Marius Wolf, Mahmoud Dahoud and possibly even Jude Bellingham vying for a place in the attacking third. Wherever possible, Erling Haaland will start up front, leaving three spaces behind to be fought over. 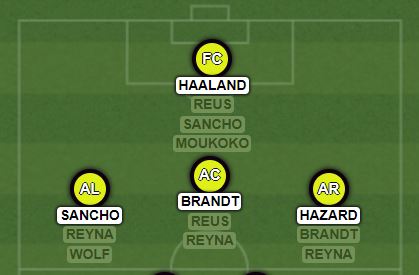 “I do feel slightly more comfortable in the No. 10 role but I can play on the wing too” Reyna admitted this week in an interview with the club’s website. “Borussia Dortmund is a big club. We have a good team and we know that we can win something.

“I want to keep working, play as many matches as possible and gradually establish myself as a first-team regular. I learned a lot last season when I was coming on as a substitute, but now I’m ready to take on a bigger role. I’m only 17 and I still have a lot to learn, but I’m ready to make an impact on the team.”

Lucien Favre is very much a coach, who is not afraid of letting young talent play if the player is good enough (Sancho, Haaland, Morey, Zagadou). This will give hope to Reyna (and Bellingham) in their quest to make more of an impact for the club going into next season. Favre is reportedly very happy with Reyna’s progress describing him as “very, very, very clever.”

Dortmund’s sporting director Michael Zorc is expecting big things this season telling Sportbild: “Giovanni made a huge leap forward in the second half of last season. At the age of 17, he has already played 15 Bundesliga games, has been in the starting eleven several times and showed against Leipzig that he can definitely play at the highest level.

“Gio’ is still extremely young, but he has a lot of the qualities that we need, especially technical ability, speed and the ability to score goals. I’m sure we’ll have a lot of fun with him in the new season,” Zorc added.

Bayern Munich showed last season what can be achieved by fielding a settled line-up, so it could be that Reyna has to settle for brief cameos, but should the three behind Haaland falter for any reason or see injuries impact, he will be chomping at the bit to grab his chance to impress.

Der Klassiker once again lived up to its billing as one of the top matches in the Bundesliga with a highly entertaining game at the Allianz Arena replete with five goals, a Robert Lewandowski/ Erling […]